There are no ‘real’ signs that the economy is improving.

– About half of US mortgages seen underwater by 2011 (Reuters)
NEW YORK (Reuters) – The percentage of U.S. homeowners who owe more than their house is worth will nearly double to 48 percent in 2011 from 26 percent at the end of March, portending another blow to the housing market, Deutsche Bank said on Wednesday.

– US Bank Failures Rise to 72 With Collapses in Florida, Oregon (Bloomberg):
Aug. 8 (Bloomberg) — U.S. bank failures rose to 72 this year with the collapse of two lenders in Florida and one in Oregon amid the worst economic slump since the Great Depression. 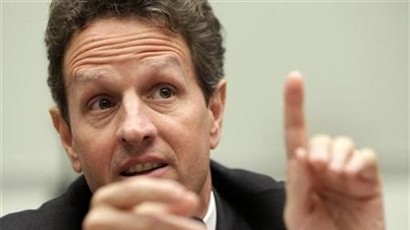 Washington — U.S. Treasury Secretary Timothy Geithner asked Congress to increase the $12.1 trillion debt limit on Friday, saying it is “critically important” that they act in the next two months.

Mr. Geithner, in a letter to U.S. lawmakers, said that the Treasury projects that the current debt limit could be reached as early mid-October. Increasing the limit is important to instilling confidence in global investors, Mr. Geithner said.

The Treasury didn’t request a specific increase in the letter.

“It is critically important that Congress act before the limit is reached so that citizens and investors here and around the world can remain confident that the United States will always meet its obligations,” Mr. Geithner said in a letter to lawmakers.

Mr. Geithner said the that it is “clearly a moment in our history” that requires support from both Democrats and Republicans for the increase.

The non-partisan Congressional Budget Office said Thursday the federal government’s budget deficit reached $1.3 trillion through the first ten months of fiscal 2009, on track to reach a record high of $1.8 trillion for the 12-month period.

Write to Corey Boles at corey.boles@dowjones.com and Michael R. Crittenden at michael.crittenden@dowjones.com

1 thought on “Geithner Asks Congress to Increase US Debt Limit”