… a move that would cost THE TAXPAYER billions of dollars.

The US is totally broke. US federal tax revenue plummets most since 1932! 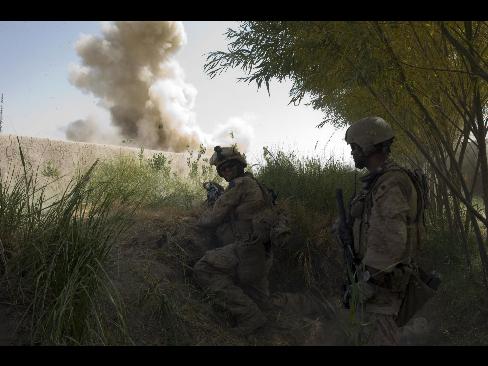 Aug. 5 (Bloomberg) — President Barack Obama and top U.S. military commanders are being pressed by senators and civilian advisers to more than double the size of Afghan security forces, a move that would cost billions of dollars.

In letters and face-to-face meetings, the lawmakers and the advisers have urged Obama, National Security Advisor Jim Jones and the new U.S. commander in Afghanistan to boost the Afghan National Army and police from current levels of 175,000 to at least 400,000.

“Any further postponement” of a decision to support a surge in Afghan forces will hamper U.S. efforts to quell an insurgency in its eighth year, Senators Joseph Lieberman, chairman of the Homeland Security Committee, and Carl Levin, chairman of the Armed Services Committee, wrote to the White House in a July 21 letter obtained by Bloomberg News.

General Stanley McChrystal, the new U.S. and NATO commander in Afghanistan, will recommend a speedier expansion of Afghan forces beyond current targets in an assessment he will give within a month to U.S. Defense Secretary Robert Gates and North Atlantic Treaty Organization Secretary General Anders Fogh Rasmussen, according to a senior military official familiar with the review.

McChrystal’s report won’t propose how many additional U.S. or NATO troops may be needed to train those Afghan forces or to boost the U.S. fighting effort, the official said, adding that any discussion of U.S. and NATO troop strength will come later.

U.S. intelligence agencies, in a document submitted to the Senate Intelligence Committee April 24, estimated the Afghan Army alone would need to grow to 325,000 — more than triple its current strength — to mount an effective counterinsurgency.

In a meeting last week with Lieutenant General Douglas Lute, the deputy national security adviser who oversees Afghan policy at the White House, Levin said a substantial expansion of Afghan forces is essential, according to his spokeswoman, Tara Andringa.

In a May 19 letter to Obama, 17 Democrats and Republicans on the Senate Armed Services Committee, including Levin, a Michigan Democrat, Lieberman, a Connecticut independent, and Senator John McCain of Arizona, the 2008 Republican presidential candidate, echoed the Afghan government’s view that a doubling of Afghan forces is needed. They cautioned Obama against “taking an incremental approach” that “does not reflect the realities on the ground.”

The Department of Defense has requested $7.5 billion for fiscal year 2010 to fund the expansion. Training and equipping 160,000 additional forces, as the lawmakers and officials are urging, would balloon costs and require thousands more foreign military advisers, a commitment the Obama administration has been reluctant to make.

Senators argued in their May letter that building Afghanistan’s own forces would be far cheaper than sending more U.S. soldiers. “For the cost of a single American soldier in Afghanistan, it is possible to sustain 60 or more Afghans,” the senators wrote.

A similar message was drummed home by a dozen civilian national security experts in meetings with McChrystal and in a written report they gave him after a month in Afghanistan assessing ground conditions.

McChrystal asked the analysts from the secretary of defense’s office, the Congressional Research Service, Washington research institutions, the European Union and a French think tank for help in preparing his assessment.

Gates has given McChrystal more time to finish his review, originally due in mid-August. Pentagon spokesman Geoff Morrell said today Gates expects it by late August or early September.

The calls for the administration to raise the targets for more Afghan forces echo comments to reporters last month by Brigadier General Larry Nicholson, commander of U.S. Marines leading an offensive in Afghanistan’s Helmand province. He said he was “not going to sugarcoat it. The fact of the matter is we don’t have enough Afghan forces” partnering with U.S. troops.

More Afghan troops would bolster U.S. efforts to conduct joint operations, said Major General Curtis Scaparrotti, the commander for NATO forces in eastern Afghanistan, where the U.S. is the lead nation in the coalition.

“I do see a need for a greater capacity within the Afghan national security forces,” Scaparrotti told reporters at the Pentagon yesterday via video link from Afghanistan. “General McChrystal has stated we look at not only building their competency but building their capacity at a quicker pace.”

Lieberman, who has long advocated an expansion of Afghan forces, said the commitment “is a decision that we have avoided making for far too long.”

“Every day we continue to drag our feet and fail to commit to the indigenous security forces” hinders the fight against extremists and delays the pullout of U.S. troops in Afghanistan, Lieberman told Bloomberg News last month.

Retired Lieutenant Colonel John Nagl, a counterinsurgency expert, predicts doubling the size of the Afghan Army would likely be a five-year, $25 billion commitment that would require 12,000 U.S. military trainers. Those troops would have to be reassigned from other duties.

The realization in Washington “of the scope and scale of what would be required in Afghanistan is frankly causing waves,” said Nagl, a member of the Defense Policy Board that advises the secretary of defense. He is president of the Center for a New American Security in Washington.

“The national security community, broadly speaking, recognizes the importance of a much larger Afghan Army” as a prerequisite for an eventual exit by U.S. troops, said Nagl. “The administration has not yet decided to pursue that path.”

Jones, Obama’s national security adviser, in June said the president’s strategy to boost civilian assistance should be given time to work before further commitments are made.

In February and March, Obama pledged 17,000 additional U.S. ground troops and 4,000 trainers, all of whom will be deployed by the end of September, said Major John Redfield, a spokesman for U.S. Central Command.

To contact the reporter on this story: Indira Lakshmanan in Washington at ilakshmanan@bloomberg.net