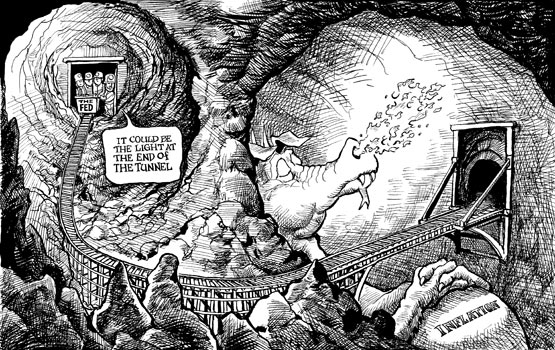 NEW YORK, July 29 (Reuters) – The sound money set remains concerned that the Federal Reserve’s emergency actions to corral collapse could ignite hyperinflation. In particular, they point to the explosion of excess reserves inside the banking system, which they call dry tinder just waiting for the spark of recovery. Bill Dudley, president of the Federal Reserve Bank of New York, says this isn’t an issue because the Fed now pays interest on excess reserves. It’s a good argument, but only in the short run. 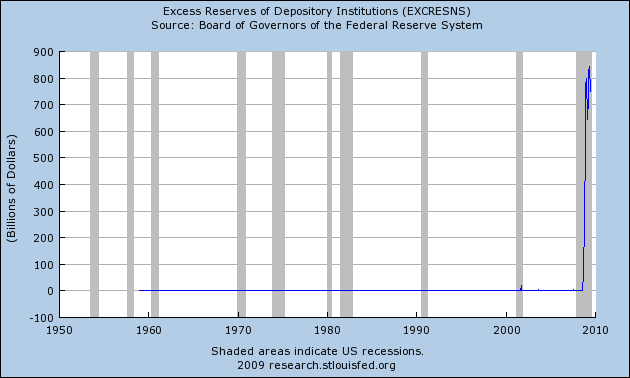 To liquefy the banking system, the Fed drastically expanded its balance sheet, which, as you can see in the chart to the right, has led to an explosion of excess reserves at banks.

For decades they never rose above $10 billion. Now they’re above $700 billion. To understand why this level of excess reserves has some worried about hyperinflation, it helps to understand what they are.

The Fed requires banks to keep a certain level of assets in reserve against deposits, either cash in the vault or reserves held at the Fed. Reserves held over this required amount are referred to as “excess” reserves which banks are free to lend out.

When banks lend money into the economy, the money borrowed typically ends up as a deposit in another bank. Say I borrow to buy a house; the mortgage I get from the bank is money I give to the seller, who then deposits the cash in his own bank.

But banks aren’t lending it out. Why not? As Dudley points out in his speech, it’s because the Fed is now paying them an interest rate.

Before last October, banks lent out all their excess reserves. After all, excess cash in the vault earns the bank no profit. But then Congress gave Ben Bernanke the power to pay interest on excess reserves, which means banks now can earn a return by keeping them on deposit at the Fed. Money that could be lent isn’t, inflation remains a potential threat, not a kinetic one.

But there’s a catch. When the economy recovers banks won’t any longer want to keep their excess reserves on deposit at the Fed, not unless the Fed is willing to pay a much higher interest rate.

Walker Todd of the American Institute of Economic Research argues that “the economy won’t be able to handle the high interest rates the Fed will be forced to charge in order to keep excess reserves immobilized in its vault.”

The Fed argues it has other tools to shrink its balance sheet when the time is right. For one, its emergency lending facilities are priced high enough such that banks will stop drawing on them when the economy recovers. But even after its lending facilities are wound down the Fed acknowledges the level of excess reserves will still be huge. To keep them immobilized will require substantially higher rates.

But raising rates will cause asset prices to plummet. Weak balance sheets will collapse and the financial crisis could return in full force. This is the conundrum the Fed faces.