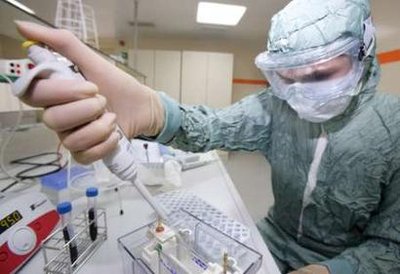 Around 12,000 U.S. children will be used as guinea pigs for an experimental swine flu vaccine known to contain the dangerous ingredient squalene, which has been directly linked with cases of Gulf War Syndrome and a host of other debilitating diseases.

According to a report in the Oklahoman, 12,000 children nationwide will partake in “fast-tracked studies” to test the side-effects of the untested swine flu vaccine in trials set to begin next month.

“The trials will test the vaccine’s effectiveness and whether or not it has negative side effects in patients,” states the report.

Since less than 100 children in the U.S. die from regular seasonal flu each year, a reasonable estimate would be that around 100 children will die from swine flu over the course of the next year.

So in effect, the authorities will vaccinate millions of children in order to try and prevent 100 deaths. If the mass vaccination program mirrors the previous swine flu outbreak of 1976 then the vaccine is likely to kill more people than the actual virus.

Furthermore, since the swine flu vaccine includes squalene, a dangerous adjuvant that contributed to Gulf War Syndrome cases, there’s little doubt that it will lead to debilitating lifelong diseases far more deadly than the swine flu virus itself for thousands of children if a mass vaccination campaign is conducted.

According to Meryl Nass, M.D., “A novel feature of the two H1N1 vaccines being developed by companies Novartis and GlaxoSmithKline is the addition of squalene-containing adjuvants to boost immunogenicity and dramatically reduce the amount of viral antigen needed. This translates to much faster production of desired vaccine quantities.”

“Research shows that squalene is the experimental anthrax vaccine ingredient that caused devastating autoimmune diseases and deaths for many Gulf War veterans from the US, UK, and Australia, yet it continues in use today and for new vaccines development in labs,” writes Stephen Lendman.

According to award-winning investigative journalist Gary Matsumoto, there’s a “close match between the squalene-induced diseases in animals and those observed in humans injected with this oil: rheumatoid arthritis, multiple sclerosis and systemic lupus erythematosus.”

“There are now data in more than two dozen peer-reviewed scientific papers, from ten different laboratories in the US, Europe, Asia and Australia, documenting that squalene-based adjuvants can induce autoimmune diseases in animals…observed in mice, rats, guinea pigs and rabbits. Sweden’s Karolinska Institute has demonstrated that squalene alone can induce the animal version of rheumatoid arthritis. The Polish Academy of Sciences has shown that in animals, squalene alone can produce catastrophic injury to the nervous system and the brain. The University of Florida Medical School has shown that in animals, squalene alone can induce production of antibodies specifically associated with systemic lupus erythematosus,” writes Matsumoto.

Micropaleontologist Dr. Viera Scheibner, who conducted research into the adverse effects of adjuvants in vaccines, wrote the following about squalene.

Efforts on behalf of authorities to prepare the public for a mass vaccination campaign, which could even be made mandatory if the crisis escalates, have been intensifying in recent weeks.

And yet, as Richard Halvorsen, a Central London GP and medical director of BabyJabs, a children’s immunisation service, writes in the London Times this week, all indications are that the swine flu vaccine will have the least effect in those most at risk from swine flu – children, the elderly and people with underlying health problems.

In his article, Mass flu vaccination would be madness, Halvorsen writes, “Is all this really necessary? To start with, swine flu is far milder than we first feared, so the case for vaccinating millions of healthy adults against a disease that is no more unpleasant than a bad cold is questionable,” adding, “There is no good evidence that the vaccine helps those with chronic health problems or pregnant women. However, we do know that the immunisation offers no more than a modest benefit in the elderly; indeed, the effectiveness of the vaccine is known to decrease sharply after 70 years of age.”

“We have experience of mass vaccination against swine flu from which lessons should be learnt. In America in 1976 a vaccine was offered to the whole population to prevent the spread of an epidemic of swine flu. Millions were rapidly immunised, but the vaccination campaign was stopped after a rise in cases of Guillain-Barré syndrome (GBS) among recipients of the vaccine. GBS is an autoimmune disorder that causes paralysis of the arms or legs or, rarely, the whole body; the sufferer usually makes a complete recovery, but some suffer permanent paralysis and a few die. Research later estimated that there was one case of GBS caused by every 100,000 swine flu vaccines given. If the current vaccine caused a similar rate of cases, then we could expect hundreds of people to get GBS, some of whom will suffer permanent paralysis or die.”

Given that the vaccine contains an ingredient directly linked with a plethora of horrific diseases, will you take measures to protect your child from a mass vaccination program?

What if the government decrees a mandatory vaccination program and tries to enforce it at gunpoint, as health authorities have already indicated could happen?

With increasing public awareness of the dangers of vaccines, allied with the bizarre eugenics policies embraced by people like John Holdren, Obama’s top science advisor, it seems inevitable that millions will refuse to comply with a mass vaccination program even if the government attempts to implement it by force.