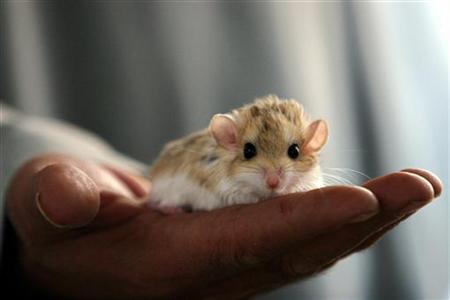 Abdel Halim Tolba, a snake hunter, holds a mouse which is used to feed snakes at the Tolba snake farm in Cairo, Egypt. (REUTERS)

They used induced pluripotent skin cells, or iPS cells — cells that have been reprogrammed to look and act like embryonic stem cells. Embryonic stem cells, taken from days-old embryos, have the power to morph into any cell type and, in mice, can be implanted into a mother’s womb to create living mouse pups.

Their experiment, published in Nature, means that it is theoretically possible to clone someone using ordinary connective tissue cells found on the person’s skin, but the experts were quick to distance themselves from such controversy.

“We are confident that tremendous good can come from demonstrating the versatility of reprogrammed cells in mice, and this research will be used to … understand the root causes of disease and lead to viable treatments and cures of human afflictions,” said Fanyi Zeng of the Shanghai Institute of Medical Genetics at Shanghai Jiao Tong University.

“It would not be ethical to attempt to use iPS cells in human reproduction. It is important for science to have ethical boundaries,” she said, adding that their study was “in no way meant as a first step in that direction.”

No one has ever cloned a human being and while many stem cell experiments in mice have been replicated in humans, not all have.

Led by Qi Zhou at the Chinese Academy of Sciences’s State Key Laboratory of Reproductive Biology, the team created iPS cells, using mouse fibroblasts, which are cells found in connective tissue in the skin.

Stem cells are the body’s master cells, giving rise to all the tissues, organs and blood. Embryonic stem cells are considered the most powerful kind of stem cells as they have the potential to give rise to any type of tissue.

But they are difficult to make and require the use of an embryo or cloning technology. Many people also object to using human embryonic stem cells and many countries limit funding for such experiments.

From the skin cells, the Chinese scientists created 37 stem cell lines, and of these, three generated live births.

“One line can generate such competent mice that the longest living one we have is nine months,” Zeng told Reuters.

The Chinese experiment generated questions and caution from other stem cell researchers not connected to the study.

“These investigators have, for the first time, unequivocally demonstrated that the iPS lines they have generated are truly pluripotent,” wrote Andrew Laslett, group leader of Human Embryonic Stem Cell Technology at the Australian Stem Cell Center in Melbourne, Australia.

Pluripotent is a term meaning the cells can give rise to all the tissues in the body.

“Moreover, the long-term stability of both the iPS cell lines and the long-term health of the mice generated using this procedure are yet to be reported. It will be interesting to see whether mice generated in this fashion have a higher propensity for tumor formation,” Laslett wrote.