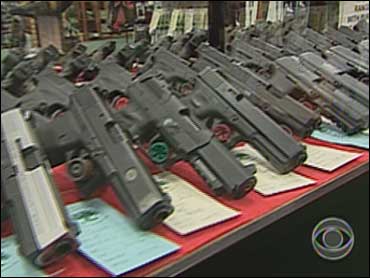 More recently, federal courts have interpreted the Tenth Amendment narrowly, in a way that justifies almost any law on grounds that it intends to regulate interstate commerce. In the 2005 case of Gonzales v. Raich, for instance, the Supreme Court ruled that a person growing marijuana for her own medicinal use could have a “substantial effect on interstate commerce.”

(In an impassioned dissent at the time, Justice Clarence Thomas wrote: “If Congress can regulate this under the Commerce Clause, then it can regulate virtually anything — and the federal government is no longer one of limited and enumerated powers.”)

Gary Marbut, president of the Montana Shooting Sports Association, said in an interview with CBSNews.com on Monday that he expects to be facing off against the Obama administration in court soon. “We will find the right test cases to get us in court,” he said.

Marbut believes that the letters were’t that meaningful because they were addressed to gun manufacturers and dealers who already are licensed by the federal government. “Those people already are under the thumb of the Feds,” he said. “We’ve assumed they wouldn’t want to put their circumstances at risk in dabbling in the state-made guns business. The people who the letters are addressed to are pretty irrelevant to the whole discussion.”

Translation: If you’re a gunsmith talented enough to build a made-in-Montana gun under the state’s forthcoming law, give Marbut a ring. Just don’t be surprised if the Bureau of Alcohol, Tobacco, and Firearms, and Explosives is not entirely pleased.