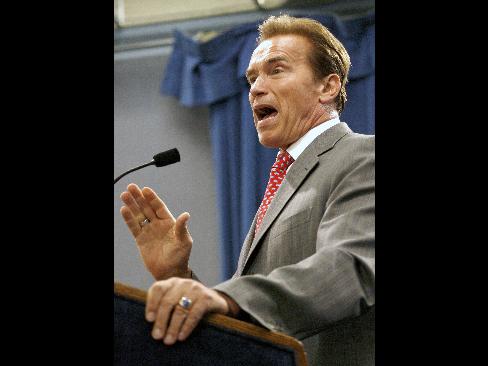 July 21 (Bloomberg) — California lawmakers reached an agreement with Governor Arnold Schwarzenegger over how to close a $26 billion budget deficit that pushed the most-populous U.S. state to the brink of insolvency.

The deal, reached by legislative leaders after two months of frequently acrimonious negotiations, would slash spending for schools, public works and welfare programs amid the longest recession since the 1930s. If approved by the full Senate and Assembly, the agreement will also siphon money from municipalities, force companies and individuals to pay income taxes sooner and make it more difficult to receive state aid.

The agreement promises to end a battle over the $100 billion budget that forced California to pay some bills with IOUs, pushed debt ratings on $72 billion of bonds closer to non- investment grade and threatened to further batter the state’s economy. It is the second time this year that the government redrew the budget amid job losses that pushed unemployment to 11.5 percent in May and declining incomes that lowered tax collections 15 percent from a year earlier.

Senate and Assembly leaders said they will seek to put the proposals to a vote by July 23. It would require passage of more than a dozen bills by a two-thirds margin. While Democrats control both chambers of the Legislature, they are six votes shy of such a supermajority.

It also calls for the state to divert more than $2 billion of tax receipts meant for local governments, redevelopment agencies and transportation districts. That money would be repaid with interest. Local governments could sell bonds backed by the promise of repayments. The agreement also shifts $1.5 billion between accounts to save money and moves the last payday for state workers in the current fiscal year into the next.

“I hope sincerely that once we are past this recession, we will be able to restore some of the funding that was cut,” said Senate President Darrell Steinberg, a Democrat from Sacramento.

A budget deal struck in February nearly faltered in the Legislature, only to pass after a weekend of all-night sessions when enough Republicans agreed to what Schwarzenegger called the largest tax increase in California history. Still, the deficits reappeared as the economy failed to emerge from the now 20-month recession.

The magnitude of the slump made it difficult for Democrats and Republicans to agree on a response. Schwarzenegger, who bucked his party by supporting February’s increase, and his fellow Republicans ruled out another round of raising taxes. Voters in May defeated a proposal to extend the tax increase and borrow money to shore up the budget, an outcome Schwarzenegger said was a message that politicians needed to scale back government.

Democrats contested the scope of his proposed cuts, which would have eliminated welfare programs that provide aid to jobless families and health insurance to nearly a million children.

Passage of a budget would also clear the way for Treasurer Bill Lockyer to borrow the billions California needs to pay its bills until the bulk of taxes are collected later in the year.

Without a balanced budget, officials said such a borrowing would be costly, if not impossible, because of the state’s tumbling credit rating and concerns among investors about how they would be repaid. Instead, California began issuing IOUs to businesses and individuals to ensure that it has enough cash to meet key obligations — including interest on its bonds — that are given high priority under the constitution.

The use of IOUs has been done only one other time since the Great Depression and it brought unfavorable attention to the state.

California bond yields, which move in the opposite direction as price, have jumped compared with top-rated municipal bonds. The difference between a 10-year California bond and a top-rated municipal security reached as much as 1.71 percentage points on July 1, when the California debt yielded 5.21 percent, according to Bloomberg data. The difference has since slipped to 1.57 percent as investors speculated that prices would improve once a budget deal is struck.

California, the world’s eighth-largest economy, was already the lowest-rated U.S. state. Standard & Poor’s gives the state it’s A grade, the sixth-highest of 10 investment levels. The firm reaffirmed that assessment on July 1.

Several banks also exerted pressure on lawmakers to act quickly by refusing to exchange IOUs for cash, threatening to deal a blow to businesses that work for the state. Among the banks were JPMorgan Chase & Co. and Bank of America Corp.

To contact the reporters on this story: Michael B. Marois in Sacramento at mmarois@bloomberg.net; William Selway in San Francisco at wselway@bloomberg.net.