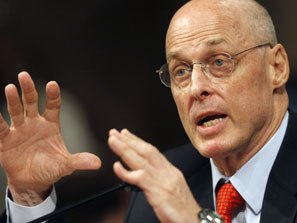 Former Treasury Secretary Henry Paulson made no bones about it: He did threaten Bank of America CEO Ken Lewis when Lewis threatened to pull the plug on the Merrill Lynch merger last fall.

“I further explained to him that, under such circumstances, the Federal Reserve could exercise its authority to remove management and the board of Bank of America,” Paulson told the House Oversight and Government Reform Committee on Thursday. “By referring to the Federal Reserve’s supervisory powers, I intended to deliver a strong message.”

That admission pretty much blew away the committee’s top Republican, Rep. Darrell Issa of California.

“The inappropriate behavior of government officials did not start or end with the threat to fire Ken Lewis and Bank of America’s board of directors,” Issa said. “It is a threat to the foundations of our free society when government officials, acting in the midst of a crisis, use dire predictions of imminent disaster to justify their encroachment on our individual liberty and the rule of law.”