The average length of unemployment is higher than it’s been since government began tracking the data in 1948. 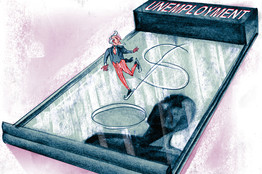 The recent unemployment numbers have undermined confidence that we might be nearing the bottom of the recession. What we can see on the surface is disconcerting enough, but the inside numbers are just as bad.

The Bureau of Labor Statistics preliminary estimate for job losses for June is 467,000, which means 7.2 million people have lost their jobs since the start of the recession. The cumulative job losses over the last six months have been greater than for any other half year period since World War II, including the military demobilization after the war. The job losses are also now equal to the net job gains over the previous nine years, making this the only recession since the Great Depression to wipe out all job growth from the previous expansion.

Here are 10 reasons we are in even more trouble than the 9.5% unemployment rate indicates:

– June’s total assumed 185,000 people at work who probably were not. The government could not identify them; it made an assumption about trends. But many of the mythical jobs are in industries that have absolutely no job creation, e.g., finance. When the official numbers are adjusted over the next several months, June will look worse.

– No fewer than 1.4 million people wanted or were available for work in the last 12 months but were not counted. Why? Because they hadn’t searched for work in the four weeks preceding the survey.

– The number of workers taking part-time jobs due to the slack economy, a kind of stealth underemployment, has doubled in this recession to about nine million, or 5.8% of the work force. Add those whose hours have been cut to those who cannot find a full-time job and the total unemployed rises to 16.5%, putting the number of involuntarily idle in the range of 25 million.

– The average work week for rank-and-file employees in the private sector, roughly 80% of the work force, slipped to 33 hours. That’s 48 minutes a week less than before the recession began, the lowest level since the government began tracking such data 45 years ago. Full-time workers are being downgraded to part time as businesses slash labor costs to remain above water, and factories are operating at only 65% of capacity. If Americans were still clocking those extra 48 minutes a week now, the same aggregate amount of work would get done with 3.3 million fewer employees, which means that if it were not for the shorter work week the jobless rate would be 11.7%, not 9.5% (which far exceeds the 8% rate projected by the Obama administration).

– The average length of official unemployment increased to 24.5 weeks, the longest since government began tracking this data in 1948. The number of long-term unemployed (i.e., for 27 weeks or more) has now jumped to 4.4 million, an all-time high.

– The average worker saw no wage gains in June, with average compensation running flat at $18.53 an hour.

– The goods producing sector is losing the most jobs — 223,000 in the last report alone.

– The prospects for job creation are equally distressing. The likelihood is that when economic activity picks up, employers will first choose to increase hours for existing workers and bring part-time workers back to full time. Many unemployed workers looking for jobs once the recovery begins will discover that jobs as good as the ones they lost are almost impossible to find because many layoffs have been permanent. Instead of shrinking operations, companies have shut down whole business units or made sweeping structural changes in the way they conduct business. General Motors and Chrysler, closed hundreds of dealerships and reduced brands. Citigroup and Bank of America cut tens of thousands of positions and exited many parts of the world of finance.

Job losses may last well into 2010 to hit an unemployment peak close to 11%. That unemployment rate may be sustained for an extended period.

Can we find comfort in the fact that employment has long been considered a lagging indicator? It is conventionally seen as having limited predictive power since employment reflects decisions taken earlier in the business cycle. But today is different. Unemployment has doubled to 9.5% from 4.8% in only 16 months, a rate so fast it may influence future economic behavior and outlook.

How could this happen when Washington has thrown trillions of dollars into the pot, including the famous $787 billion in stimulus spending that was supposed to yield $1.50 in growth for every dollar spent? For a start, too much of the money went to transfer payments such as Medicaid, jobless benefits and the like that do nothing for jobs and growth. The spending that creates new jobs is new spending, particularly on infrastructure. It amounts to less than 10% of the stimulus package today.

About 40% of U.S. workers believe the recession will continue for another full year, and their pessimism is justified. As paychecks shrink and disappear, consumers are more hesitant to spend and won’t lead the economy out of the doldrums quickly enough.

It may have made him unpopular in parts of the Obama administration, but Vice President Joe Biden was right when he said a week ago that the administration misread how bad the economy was and how effective the stimulus would be. It was supposed to be about jobs but it wasn’t. The Recovery Act was a single piece of legislation but it included thousands of funding schemes for tens of thousands of projects, and those programs are stuck in the bureaucracy as the government releases the funds with typical inefficiency.

Another $150 billion, which was allocated to state coffers to continue programs like Medicaid, did not add new jobs; hundreds of billions were set aside for tax cuts and for new benefits for the poor and the unemployed, and they did not add new jobs. Now state budgets are drowning in red ink as jobless claims and Medicaid bills climb.

Next year state budgets will have depleted their initial rescue dollars. Absent another rescue plan, they will have no choice but to slash spending, raise taxes, or both. State and local governments, representing about 15% of the economy, are beginning the worst contraction in postwar history amid a deficit of $166 billion for fiscal 2010, according to the Center on Budget and Policy Priorities, and a gap of $350 billion in fiscal 2011.

Households overburdened with historic levels of debt will also be saving more. The savings rate has already jumped to almost 7% of after-tax income from 0% in 2007, and it is still going up. Every dollar of saving comes out of consumption. Since consumer spending is the economy’s main driver, we are going to have a weak consumer sector and many businesses simply won’t have the means or the need to hire employees. After the 1990-91 recessions, consumers went out and bought houses, cars and other expensive goods. This time, the combination of a weak job picture and a severe credit crunch means that people won’t be able to get the financing for big expenditures, and those who can borrow will be reluctant to do so. The paycheck has returned as the primary source of spending.

This process is nowhere near complete and, until it is, the economy will barely grow if it does at all, and it may well oscillate between sluggish growth and modest decline for the next several years until the rebalancing of excessive debt has been completed. Until then, the economy will be deprived of adequate profits and cash flow, and businesses will not start to hire nor race to make capital expenditures when they have vast idle capacity.

No wonder poll after poll shows a steady erosion of confidence in the stimulus. So what kind of second-act stimulus should we look for? Something that might have a real multiplier effect, not a congressional wish list of pet programs. It is critical that the Obama administration not play politics with the issue. The time to get ready for a serious infrastructure program is now. It’s a shame Washington didn’t get it right the first time.

Mr. Zuckerman is chairman and editor in chief of U.S. News & World Report.

1 thought on “US Economy Is Even Worse Than You Think”