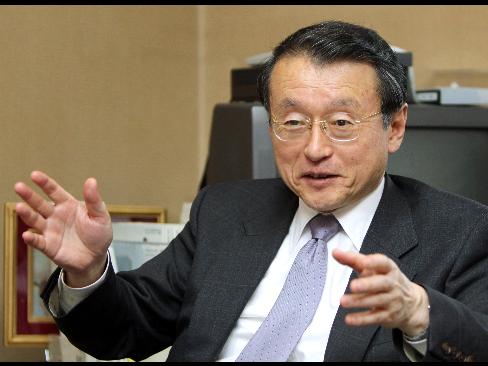 Masaharu Nakagawa, a member of the Democratic Party of Japan (DPJ), speaks during an interview in Tokyo, March 13, 2009. Photographer: Haruyoshi Yamaguchi/Bloomberg News

July 13 (Bloomberg) — Japan’s opposition party, leading in polls ahead of next month’s election, said the nation should consider shifting its $1 trillion of foreign reserves away from the dollar and buying International Monetary Fund bonds.

“In the medium to long term, we need to do what we can to avoid the risk of currency losses or economic turbulence that could result if the dollar were to swing,” Masaharu Nakagawa, the shadow finance minister in the Democratic Party of Japan, said in an interview in Tokyo on July 9. “Many countries are starting to diversify their reserves.”

Japanese investors are the biggest foreign holders of Treasuries after China with $685.9 billion of the securities in April, and Finance Minister Kaoru Yosano said last month his trust in the bonds is “unshakable.” The DPJ yesterday beat the ruling Liberal Democratic Party in elections for Tokyo’s city assembly, boosting its prospects ahead of national polls that Prime Minister Taro Aso today called for Aug. 30.

“The current reality of Japan’s foreign-currency reserves is that their heavy weighting toward dollar assets means any fall in the dollar’s value leads to valuation losses,” said Susumu Kato, chief economist in Tokyo at Calyon Securities, the investment banking unit of Credit Agricole SA. “The DPJ is opposed to a foreign-currency reserve policy that is so wholly skewed to the dollar.”

Nakagawa said Japan should consider purchases of new bonds issued by the International Monetary Fund that will pay an interest rate pegged to the fund’s basket of currencies — the dollar, euro, yen and pound — and known as Special Drawing Rights. The dollar is the principal component of SDRs. The IMF said this month it would issue bonds to its 186 members for the first time.

“We should start considering that as an option,” Nakagawa said. “I am not saying we should do it right away. If everyone starts doing it all of sudden, it may sway the dollar.” He didn’t say Japan should sell any of its dollar holdings.

DPJ lawmaker Tsutomu Okubo, a director of the upper house’s financial committee, said there’s no consensus in the party on currency policy. Enhancing trust in the dollar and Treasuries is beneficial for Japan and the country shouldn’t change its currency reserve allocations for the time being, he said in an interview today.

China, India, Brazil, Mexico and South Africa last week challenged the U.S. dollar as the primary denomination of world reserves. In China, whose foreign-exchange reserves probably topped $2 trillion for the first time in the three months to June 30, Premier Wen Jiabao this year said he was concerned that his nation’s dollar assets may decline as the U.S. sells record amounts of debt to fund stimulus spending.

Japan holds $1.02 trillion in foreign reserves, also the world’s largest after China’s. Losses on the holdings stood at about 21 trillion yen ($227 billion) at the end of May, according to the Finance Ministry’s estimate.

Shifting reserves away from dollars “may be difficult for Japan” because it would weaken the U.S. currency and reduce the value of the country’s remaining dollar holdings, said Masafumi Yamamoto, head of foreign-exchange strategy for Japan at Royal Bank of Scotland Group Plc in Tokyo.

“If Japan and China do that, the impact will be huge,” said Yamamoto, a former Bank of Japan currency trader.

Nakagawa, 59, said Japan’s government should ask the U.S. to sell debt denominated in yen, so-called samurai bonds, as a way to diversify reserves and promote the globalization of the yen. Japan should also aim to strengthen the Chiang Mai Initiative, an Asia-wide foreign-reserve pool, and seek the creation of an Asian Monetary Fund, he said.

Nakagawa said intervening in the currency market to smooth abrupt and volatile moves is an option, though Japan shouldn’t try to push the yen up or down to achieve a prescribed level.

“If the yen were to appreciate or depreciate very steeply and the market becomes volatile, direct government intervention might be understandable,” Nakagawa said. “Intervention shouldn’t be used to strengthen or weaken it to a certain level.”

The yen gained against all 16 of the world’s major currencies in the past year. A stronger yen hurts Japanese exporters by making their products less competitive. It also lowers import costs for companies and consumers. Japan last stepped into the foreign-exchange market to sell yen in 2004.

A total of 23 percent of voters said they would choose the LDP, less than the 41 percent who favor the DPJ, according to a Yomiuri newspaper poll published July 10. The LDP has governed for all but 10 months since 1955. The DPJ already controls the upper house.