… and the intention is to loot the taxpayer, destroy the dollar & the economy and the government will default on its debt … just be a little bit more patient.

If the States use the stimulus for short-term needs, as has been proven, then that stimulus will have zero effect, except that the coming collapse will be even greater:

Cash-strapped states have used federal stimulus dollars to close short-term budget gaps and avert major tax increases but generally have not directed the money toward long-term expansion, according to a new report. 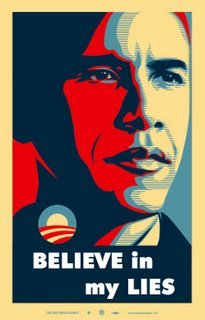 Yes, we can … be worse than the Bush administration.

July 11 (Bloomberg) — President Barack Obama said his $787 billion stimulus bill “has worked as intended” as he pushed back against Republican criticism that his recovery program has failed to rescue the economy.

“It has already extended unemployment insurance and health insurance to those who have lost their jobs in this recession,” Obama, who is traveling today in Ghana, said in his weekly Saturday radio and Web address. “It has delivered $43 billion in tax relief to American working families and business.”

Were it not for the stimulus program, the president said, “state deficits would be nearly twice as large as they are now, resulting in tens of thousands of additional layoffs — layoffs that would affect police officers, teachers, and firefighters.”

He said the Republicans want reductions in tax rates that he said would help middle-class families.

In asking for public patience, Obama said the recovery act “wasn’t designed to restore the economy to full health on its own, but to provide the boost necessary to stop the free fall.”

Enacted in February, the bill “was designed to spur demand and get people spending again and cushion those who had borne the brunt of the crisis,” the president said.

The spending plan will “accelerate greatly” through the summer and autumn, launching “thousands more infrastructure projects” that will lead to additional jobs, he said.

“We’re moving in the right direction,” Obama said. “We must let it work the way it’s supposed to, with the understanding that in any recession, unemployment tends to recover more slowly than other measures of economic activity.”

In a Bloomberg interview last month, the president said he expected unemployment rates to exceed 10 percent.

Earlier this week, Vice President Joe Biden also defended the Obama administration’s efforts to rebuild America’s economy, while expressing frustration with those who say progress is too slow.

“Remember, we’re only 140 days into this deal,” Biden said in a speech in Cincinnati. “It’s supposed to take 18 months.”

Biden went into greater detail than Obama, ticking off the programs funded through the $787 billion economic stimulus measure. Thousands of jobs a day have been saved and interest rates have been kept low, saving middle-class families $1,200 to $1,600 a year in mortgage payments, he said.

To contact the reporter on this story: Edwin Chen in Washington at Echen32@bloomberg.net