And why should Cynthia McKinney admit guilt to pirates? 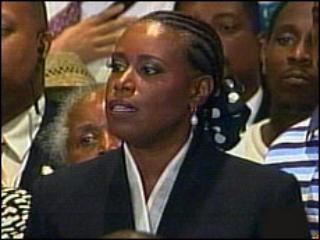 ATLANTA, Ga. — Former Georgia Congresswoman Cynthia McKinney, who was taken into custody by the Israeli Navy on Tuesday with 20 others while trying to sail through a navy blockade to deliver humanitarian supplies to Gaza, has refused Israel’s initial offer to release her from custody. According to her supporters in Atlanta, McKinney refused the offer because she would have been required to sign an admission of guilt that she violated Israel’s blockade.

“At issue is the fact that Ms. McKinney was in international waters” when the Israeli Navy stopped the group’s boat, according to a statement from the Rev. Dr. Joseph Lowery and the Atlanta-based Coalition for the People’s Agenda.

Israel disagrees, insisting that the Palestinian Authority and the rest of the international community long ago agreed to the off-shore blockade to prevent arms smuggling into Gaza.

The office of the Consulate General of Israel in Atlanta issued its own statement Friday, saying, “According to Israeli law Ms. McKinney and her fellow crew members were suggested to sign a form acknowledging their deportation, however since Ms. McKinney has refused to do so, she is expected to appear before an Israeli judge on Sunday, July 5th and afterwards be returned home as soon as possible.”

McKinney did not address any of that in a message of just under three minutes, posted on youtube.com, that she delivered by telephone from Israel.

“The Israelis hijacked us because we wanted to give crayons to the children of Gaza…. We have not committed any crime. We have been detained,” McKinney said.

She said she wants the world to “see how we have been treated just because we wanted to deliver humanitarian assistance to the people of Gaza.”

Soon after Israel seized McKinney and the others and their boat, the government promised to deliver all of the humanitarian supplies that were on the boat, but would deliver them by the ground routes into Gaza that Israel has been permitting international aid groups to use.

McKinney and the 20 others associated with the U.S.-based “Free Gaza Movement” [click here for original article] boarded the Greek-registered ship “Arion” Tuesday in Cyprus and tried to deliver humanitarian aid to Gaza by sea, by going through the Israeli Navy’s security blockade.

The Israeli Navy stopped them and took them and their boat into custody at Ashdod.

“I admire her courage. I might differ with her strategy sometimes,” said Dr. Lowery with a smile, speaking at his Atlanta home Friday evening.

“We wanted to express our concern…. Here in her home community, we are concerned for her safety. And since she’s on a mission of mercy and not munitions, we think they ought to let her come home.”

The Israeli government says McKinney was on a mission of confrontation, seeking publicity.

“Well, I’m sure they have a good argument for their action,” Lowery said. “But nevertheless, she was carrying food and medicine to heal the sick and wounded. And I think that’s a good thing. And I would hope that in the spirit of compassion and mercy and ministry, that they’ll let her come on back home.”

So as it stood as of Friday night, the Israeli justice system will not decide before Sunday what to do with McKinney and the others.