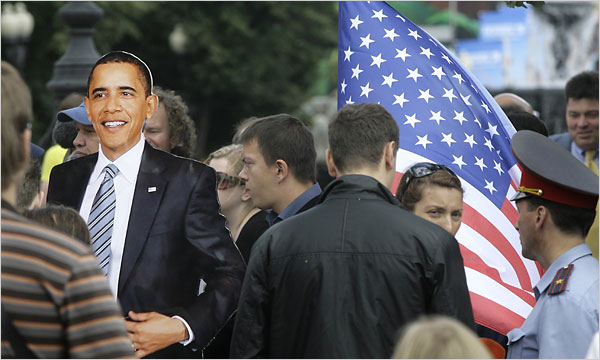 The real President Obama will visit Russia on Monday and Tuesday. On Friday, Russians in downtown Moscow had to settle for a cardboard facsimile. (AP)

MOSCOW – The Russian government has agreed to let American troops and weapons bound for Afghanistan fly over Russian territory, officials on both sides said Friday. The arrangement will provide an important new corridor for the United States military as it escalates efforts to win the eight-year war.

The agreement, to be announced when President Obama visits here on Monday and Tuesday, represents one of the most concrete achievements in the administration’s effort to ease relations with Russia after years of tension. But the two sides failed to make a trade deal or resolve differences over missile defense, and are struggling to draft a preliminary nuclear arms deal.

The blend of success and stalemate leading to Mr. Obama’s visit suggests that it is easier to talk about a “reset” button than to press it. The promise of a new era of cooperation was always predicated on the tenuous notion that a change of tone and a shift in emphasis might be enough to bridge deep divisions. But even with both sides eager for warmer ties, the issues that have torn Washington and Moscow apart did not go away with the transition at the White House.

Mr. Obama is less enthusiastic than President George W. Bush was about an antimissile system in Eastern Europe or NATO membership for Ukraine and Georgia, but has not abandoned either goal, to the consternation of the Kremlin. Despite American pressure, Moscow has not yielded in its confrontation with Georgia a year after their brief war.

So Mr. Obama’s first visit here as president will be a test of his foreign policy. American officials said that the larger message was that if the Russians did not take his open hand, he would move on to other priorities.

But Mr. Obama faces a reservoir of resentment among Russians who believe that the United States has rarely followed through on such gestures. “There’s a lot of suspicion that this has been talk, talk, talk – let’s see some real action,” said Vladimir Pozner, a state television talk show host. “At this point, there is a little bit of hope and a lot of distrust.”

Richard R. Burt, a former American arms control negotiator and a member of a Russian-American group, Global Zero, that is pushing for nuclear disarmament, said Mr. Obama must overcome that suspicion. “I just get the sense that the Russians are kind of grumpy, so there’s still some sharpness on the Russian side, despite pushing the reset button,” he said.

At the same time, Mr. Obama faces pressure not to go soft on Russia. He sounded a tough note this week, saying Prime Minister Vladimir V. Putin still “has one foot in the old ways.” He is also sending Vice President Joseph R. Biden Jr. to Georgia and Ukraine after the summit meeting to show he will not abandon them.

“We’re not going to reassure or give or trade anything with the Russians regarding NATO expansion or missile defense,” said Michael McFaul, the president’s top adviser on Russia.

Georgian officials visiting Washington last week said that they had faith in the administration, but they expressed skepticism about a real change in relations. Russia maintains as many as 15,000 troops in two breakaway Georgian republics, despite a cease-fire agreement, and last month it used its veto to end the United Nations observer mission in one of them. Both Russia and NATO recently conducted war games in the region.

“Attempts by American officials to talk with them in a civilized manner are perceived as weakness,” Grigol Vashadze, Georgia’s foreign minister, said, comparing Mr. Putin to a bandit. “Of course you can talk with him. But in the end, you know the bandit will end up kicking you and taking your wallet.”

Looking for a breakthrough for his visit, Mr. Obama tried to cut a deal to finally admit Russia into the World Trade Organization. But days after Mr. Obama’s advisers visited Russia in June to discuss the idea, Mr. Putin unexpectedly suspended Moscow’s membership bid, dashing hopes for an announcement next week.

Russian officials said they were showing good faith, pointing to their suspension of the delivery of an S-300 air defense system to Iran. “In Moscow and in Washington, people have been known to lose opportunities,” said Mikhail V. Margelov, chairman of the foreign affairs committee of Russia’s upper house of Parliament. “We have to hope that this time we won’t lose the opportunity.”

The new airspace agreement represents an important step. Until now, Russia has restricted use of its territory for the Afghan war to railroad shipments of nonlethal supplies. Under the new arrangement, officials said, planes carrying lethal equipment and troops will be allowed to make as many as 10 flights a day, or thousands a year over Russia.

The agreement was a priority for Mr. Obama, who has ordered 21,000 more American troops to Afghanistan. Supply routes through Pakistan have been troubled by that nation’s increasing volatility. Uzbekistan evicted American troops from a base in 2005, and Kyrgyzstan threatened to do the same, until American negotiators persuaded it to reverse itself, in a deal that increases the rent.

But with Mr. Obama about to depart for Moscow, negotiators were still hashing out a preliminary agreement on nuclear arms cuts to announce along with President Dmitri A. Medvedev. The agreement would lay out parameters of a treaty to be drafted by the end of the year to replace the expiring cold war Strategic Arms Reduction Treaty.

Negotiators are talking about setting a range of perhaps 1,500 to 1,700 warheads (down from 2,200 now allowed under treaty) and 500 to 1,100 delivery vehicles (down from 1,600 currently allowed). But they have not settled on the numbers, and Russia wants to link the issue to missile defense.

The two sides have agreed to create a new standing commission with subgroups on issues like climate change to work between presidential meetings. The Obama team at first proposed a new version of a commission in the 1990s named for Vice President Al Gore and Prime Minister Viktor S. Chernomyrdin. But the Russians refused to pair Mr. Putin with Mr. Biden. “Putin’s not a vice president,” an American official quoted the Russians as saying.

“This is like a midsemester report card,” said Sarah E. Mendelson, a scholar at the Center for Strategic and International Studies in Washington, who is organizing a conference on civil society here that Mr. Obama and perhaps Mr. Medvedev will attend. “It’s not looking like an A, but it’s not a D either.”