California is on track to run out of cash by the end of July. 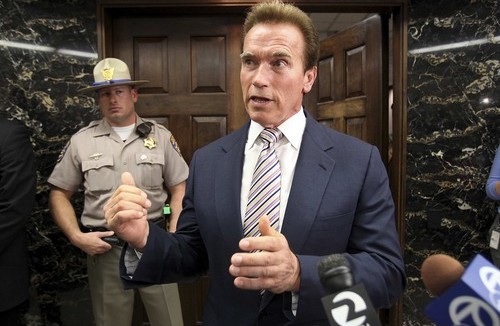 Gov. Arnold Schwarzenegger tells reporters that he is resolute about state fiscal reforms. Schwarzenegger’s high-stakes strategy could close the budget abyss or cause a meltdown of state government. (AP)

Reporting from Sacramento — Gov. Arnold Schwarzenegger, seeking to conquer what could be the last budget crisis of his tenure, is engaged in a high-stakes negotiating strategy with lawmakers that could force him to preside over a meltdown of state government.

As legislators have scrambled to stop the state from postponing payment of its bills and issuing IOUs starting next week, the governor has vowed to veto any measure that fails to close the state’s entire $24-billion deficit.

In doing so, Schwarzenegger has sent the message that he would rather allow the state to begin shutting down than let lawmakers push its troubles off for months by closing only part of the shortfall. The latter prospect could swallow up the rest of his governorship.

“Whatever needs to be done,” Schwarzenegger told reporters outside his Capitol office Friday when asked why he would be willing to delay payments to needy Californians. “I know that there is a history in this building of always being late with the budget, to drag it out and to kick that can down the alley. . . . I don’t think we have this luxury this time.”

The governor readily admits that he sees the crisis as a chance to make big changes to government — to “reform the system,” he said Friday — with proposals he has struggled to advance in the past.

Among them: reorganizing state bureaucracy, eliminating patronage boards and curbing fraud in social services that Democrats have traditionally protected. The governor also would like to move past the budget crisis to reach a deal on California’s water problems that has so far eluded him.

By agreeing to a partial budget solution such as one the Assembly approved Thursday, the governor would lose leverage to accomplish many of those things. Without the pressure of imminent insolvency, Democrats might be less likely to agree to his demands.

But if his strategy fails, he could be blamed for unnecessarily subjecting state residents to misery.

“I don’t believe the governor wants his legacy to be that he had the opportunity to avoid IOUs for Californians and that he failed to take it because he wanted to play a game of chicken,” Senate President Pro Tem Darrell Steinberg (D-Sacramento) said last week.

California Controller John Chiang has announced that on Thursday he will begin issuing IOUs on the scale of $3 billion a month, delaying payments to college students, welfare recipients, the elderly, the blind and the disabled. The state is on track to run out of cash by the end of July.

The governor has pushed lawmakers to move with urgency, but he has also made clear that his two priorities are ensuring that the state will not raise taxes, as it did in February, and that it closes the whole deficit in one shot.

The Assembly approved measures totaling $5 billion Thursday that would have cut education funding and deferred some expenses, extending the timeline before the state would run out of money. But the Senate rejected the proposal before it reached the governor’s desk, so he did not have to exercise a veto, as he had promised to do.

Even if he had, said Bruce Cain, professor of political science at UC Berkeley, the time is ripe for Schwarzenegger to take a gamble: The governor has no obvious designs on future office that might require him to be cautious, and voters who rejected tax hikes in May’s election appear to support his approach. In any case, Cain said, most Californians will see those to be hurt by IOUs as vendors and “overpaid state employees,” not themselves.

“The reality of what these cuts he is pushing for will mean hasn’t hit home with the public yet,” Cain said. “They see him standing up to unions and trying to cut all the waste and fraud. . . . Until the middle class bleeds in a way they care about, Arnold has the upper hand.”

In this final year before he becomes a lame duck, the governor has attempted to use the budget standoff to burnish the kind of legacy he originally sought, as a populist change agent who promised to control California’s finances, “blow up the boxes” of Sacramento’s bureaucracy and attack the Capitol’s sacred cows.

“We must use this crisis as an opportunity to make government more efficient, which is a much better option than raising your taxes,” Schwarzenegger said in a radio address this weekend.

In past years, his plans ran into opposition organized largely by well-funded labor groups and Democrats, who say his proposals are really meant to strangle government. Now he is newly armed with negotiating power over Democratic lawmakers desperate to preserve state programs.

Back on the governor’s demand list is a plan to cut the pensions received by state workers, which unions have stymied before but which he thinks may gain traction with a cash-strapped public. Schwarzenegger also views this as an ideal time to once again target growth and fraud in the state’s multibillion-dollar in-home healthcare program, which employs 300,000 unionized workers.

His agenda includes anti-fraud efforts and tougher enrollment requirements for the state’s food stamp programs, efforts that advocates for the poor say are designed to discourage people from participating. In his radio address, he said the state and counties could get by with a “fraction” of the 27,000 workers now handling eligibility for Medi-Cal and food stamps by using Web-based enrollment.

Schwarzenegger has revived plans to allow local school districts to contract out for services like school bus transportation and lawn maintenance, a proposal favored by the GOP but despised by school employee unions.

Gary Jacobson, a professor of political science at UC San Diego, said Schwarzenegger has put himself at risk of antagonizing the public by holding out for some of these ideas while forcing deep cuts and forswearing new taxes that could alleviate some of the pain.

“When it hits people how much damage this budget has done, they are going to say, ‘So what that he got some of these things through? Look at what he has done to us in the meantime. State parks are closed. Classrooms are huge. People are being thrown out of the hospital. Medical clinics are shutting down,’ ” Jacobson said.

“When all this hits,” he added, “it is going to be hard to imagine people will look on him favorably because he got some of the structural reforms he wanted.”