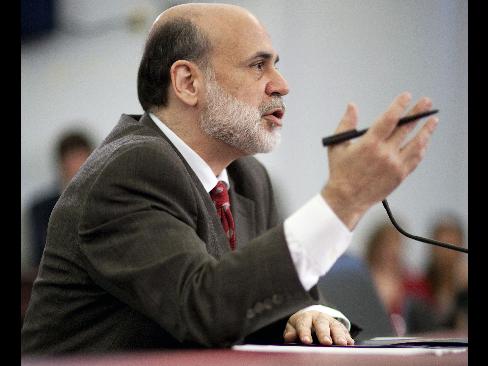 4) Bernanke is creative. Some might think creativity is a positive attribute. It is, for a design engineer. Unfortunately creativity is not a good attribute for a Fed chairman. This whole mess was sponsored by the Fed when Greenspan got creative with interest rate policy. Bernanke is light-years more creative than Greenspan as witnessed by an amazing array of Fed lending facilities and the ballooning of the Fed’s balance sheet swapped for garbage collateral. The unintended consequences of Bernanke’s extraordinary actions are coming down the road. We do not even know what those consequences are. However, we do know that the Fed has no exit policy, and will come up with one by the seat of Bernanke’s pants on the fly. Given there is no need for the Fed at all, the last thing we need is for a creative Fed.

5) Bernanke supports policies of theft. Proof of this is easy to establish. Bernanke favors a policy of 2% inflation, and inflation is theft. How so? Inflation benefits those with first access to money: governments, banks, and the wealthy. Government benefits when property taxes rise more than wages, banks benefit by borrowing money into existence, and the already wealthy benefit by being next in line for access to cheap money. By the time those low on the totem pole have access to cheap money, asset prices are already through the moon. Moreover, those with enough common sense to avoid the bubbles, get nothing for their money sitting in the bank. The middle class has been ravished by inflation, and Bernanke supports that inflation.

Please note that Bernanke cannot even follow his own mandate. Where was Bernanke when property and commodity prices were soaring? The answer is he was ignoring them. Thus we see the one sided nature of Bernanke’s policies. He let home prices soar, and now that they are crashing looks to support them. By the way, this is not just Bernanke, this is a symptom of central bankers in general.

6) Bernanke cannot dissent. As a member of the Greenspan Fed, Bernanke went along with everything Greenspan did. It is clear Greenspan failed. Thus it is clear that Bernanke failed by supporting Greenspan’s policies.

7) Bernanke supports policies of outright fraud. Fractional reserve lending is a fraud. Please consider Murray N. Rothbard and the Case for a 100 Percent Gold Dollar in which Rothbard condemned fractional reserve banking as a violation of contract. “In my view, issuing promises to pay on demand in excess of the amount of the goods on hand is simply fraud, and should be so considered by the legal system. For this means that a bank issues “fake” warehouse receipts – warehouse receipts, for example, for ounces of gold that do not actually exist in the vaults. This is legalized counterfeiting; this is the creation of money without the necessity of production, to compete for resources against those who have produced. In short, I believe that fractional-reserve banking is disastrous both for the morality and for the fundamental bases and institutions of the market economy….”

9) Bernanke has no idea where interest rates should be. Of course no one else does either. But Bernanke thinks he does. The result is overshooting interest rate policy in both directions, just as Greenspan did. This is the Fed Uncertainty Principle Corollary Number One in action: The Fed has no idea where interest rates should be. Only a free market does. The Fed will be disingenuous about what it knows (nothing of use) and doesn’t know (much more than it wants to admit), particularly in times of economic stress.

10) Bernanke is a power grabbing hack. This is the Fed Uncertainty Principle Corollary Number Two in action: The government/quasi-government body most responsible for creating this mess (the Fed), will attempt a big power grab, purportedly to fix whatever problems it creates. The bigger the mess it creates, the more power it will attempt to grab. Over time this leads to dangerously concentrated power into the hands of those who have already proven they do not know what they are doing.

Bernanke is a disingenuous liar with a memory problem. He is also an economic dunce who does not understand the cause of great depression nor could he spot a housing/credit bubble visible to nearly every blogger in the country. However, like his mentor Greenspan, Bernanke believes that every problem can be cured by throwing money at it. Finally, he is a creative, political power grabbing hack who gives memorable speeches about throwing money out of helicopters.

I have to hand it to Caroline. That is indeed a unique set of qualifications.

Bernanke’s four-year term ends in February, let us hope he is gone. Better yet, it’s time to Audit the Fed Then End It!