“Our wallet is empty, our bank is closed and our credit is dried up.” (Governor Arnold Schwarzenegger) 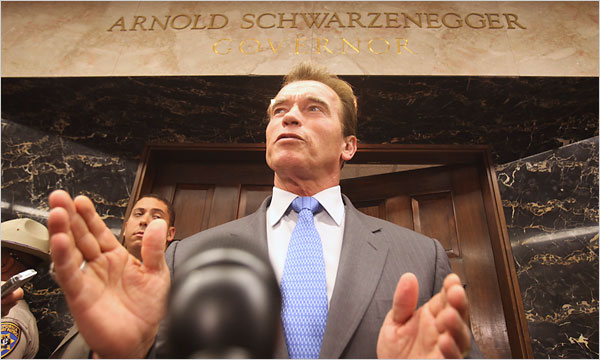 Gov. Arnold Schwarzenegger saying this month that he would veto any budget bill that included new taxes beyond what he had proposed.

In Hawaii, state employees are bracing for furloughs of three days a month over the next two years, the equivalent of a 14 percent pay cut. In Idaho, lawmakers reduced aid to public schools for the first time in recent memory, forcing pay cuts for teachers.

And in California, where a $24 billion deficit for the coming fiscal year is the nation’s worst, Gov. Arnold Schwarzenegger has proposed releasing thousands of prisoners early and closing more than 200 state parks.

Meanwhile, Maine is adding a tax on candy, Wisconsin on oil companies, and Kentucky on alcohol and cellphone ring tones.

With state revenues in a free fall and the economy choked by the worst recession in 60 years, governors and legislatures are approving program cuts, layoffs and, to a smaller degree, tax increases that were previously unthinkable.

All but four states must have new budgets in place less than two weeks from now — by July 1, the start of their fiscal year. But most are already predicting shortfalls as tax collections shrink, unemployment rises and the stock market remains in turmoil.

“These are some of the worst numbers we have ever seen,” said Scott D. Pattison, executive director of the National Association of State Budget Officers, adding that the federal stimulus money that began flowing this spring was the only thing preventing widespread paralysis, particularly in the areas of education and health care. “If we didn’t have those funds, I think we’d have an incredible number of states just really unsure of how they were going to get a new budget out.”

The states where the fiscal year does not end June 30 are Alabama, Michigan, New York and Texas.

Even with the stimulus funds, political leaders in at least 19 states are still struggling to negotiate budgets, which has incited more than the usual drama and spite. Governors and legislators of the same party are finding themselves at bitter odds: in Arizona, Gov. Jan Brewer, a Republican, sued the Republican-controlled Legislature earlier this month after it refused to send her its budget plan in hopes that she would run out of time to veto it.

In Illinois, the Democratic-led legislature is fighting a plan by Gov. Patrick J. Quinn, also a Democrat, to balance the new budget by raising income taxes. And in Massachusetts, Gov. Deval Patrick, a Democrat, has threatened to veto a 25 percent increase in the state sales tax that Democratic legislative leaders say is crucial to help close a $1.5 billion deficit in the new fiscal year.

“Legislators have never dealt with a recession as precipitous and rapid as this one,” said Susan K. Urahn, managing director of the Pew Center on the States. “They’re faced with some of the toughest decisions legislators ever have to make, for both political and economic reasons, so it’s not surprising that the environment has become very tense.”

In all, states will face a $121 billion budget gap in the coming fiscal year, according to a recent report by the National Conference of State Legislatures, compared with $102.4 billion for this fiscal year.

The recession has also proved politically damaging for a number of governors, not least Jon Corzine of New Jersey, whose Republican opponent in this year’s race for governor has tried to make inroads by blaming the state’s economic woes on him. Mr. Schwarzenegger, who sailed into office on a wave of popularity in 2003, will leave in 2011 — barred by term limits from running again — under the cloud of the nation’s worst budget crisis. And the bleak economy has played a major role in the waning popularity of Gov. David A. Paterson of New York.

Over all, personal income tax collections are down by about 6.6 percent compared with last year, according to a survey by Mr. Pattison’s group and the National Governors Association. Sales tax collections are down by 3.2 percent, the survey found, and corporate income tax revenues by 15.2 percent. (Although New Jersey announced last week that a tax amnesty program had brought in an unexpected $400 million — a windfall that caused lawmakers to reconsider some of the deeper cuts in a $28.6 billion budget they were set to approve in advance of the July 1 deadline.)

As a result, governors have recommended increasing taxes and fees by some $24 billion for the coming fiscal year, the survey found. This is on top of more than $726 million they sought in new revenues this year.

The proposals include increases in personal income tax rates — Gov. Edward G. Rendell of Pennsylvania has proposed raising the state’s income tax by more than 16 percent, to 3.57 percent from 3.07 percent, for three years — and tax increases on myriad consumer goods.

“They have done a fair amount of cutting and will probably do some more,” said Ray Scheppach, executive director of the governors association. “But as they look out over the next two or three years, they are also aware that when this federal money stops coming, there is going to be a cliff out there.”

Raising revenues is the surest way to ensure financial stability after the stimulus money disappears, Mr. Scheppach added, saying, “You’re better off to take all the heat at once and do it in one package that gets you through the next two, three or four years.”

While state general fund spending typically increases by about 6 percent a year, it is expected to decline by 2.2 percent for this fiscal year, Mr. Pattison said. The last year-to-year decline was in 1983, he said, on the heels of a national banking crisis.

The starkest crisis is playing out in California, where lawmakers are scrambling to close the $24 billion gap after voters rejected ballot measures last month that would have increased taxes, borrowed money and reapportioned state funds.

Democratic legislative leaders last week offered alternatives to Mr. Schwarzenegger’s recommended cuts, including levying a 9.9 percent tax on oil extracted in the state and increasing the cigarette tax to $2.37 a pack, from 87 cents. But Mr. Schwarzenegger has vowed to veto any budget that includes new taxes, setting the stage for an ugly battle as the clock ticks toward the deadline.

“We still don’t know how bad it will be,” Ms. Urahn said. “The story is yet to be told, because in the next couple of weeks we will see some of the states with the biggest gaps have to wrestle this thing to the ground and make the tough decisions they’ve all been dreading.”

In one preview, Gov. Tim Pawlenty of Minnesota, a Republican, said last week that he would unilaterally cut a total of $2.7 billion from nearly all government agencies and programs that get money from the state, after he and Democratic legislative leaders failed to agree on how to balance the budget.

In an example of the countless small but painful cuts taking place, Illinois announced last week that it would temporarily stop paying about $15 million a year for about 10,000 funerals for the poor. Oklahoma is cutting back hours at museums and historical sites, Washington is laying off thousands of teachers, and New Hampshire wants to sell 27 state parks.

Nor will the pain end this year, Ms. Urahn said, even if the recession ends, as some economists have predicted. Unemployment could keep climbing through 2010, she said, continuing to hurt tax collections and increasing the demand for Medicaid, one of states’ most burdensome expenses.

“Stress on the Medicaid system tends to come later in a recession, and we have yet to see the depth of that,” Ms. Urahn said. “So you will see, for the next couple years at least, states really struggling with this.”

An earlier version of this article incorrectly reported that Maine is adding a tax on ski tickets.