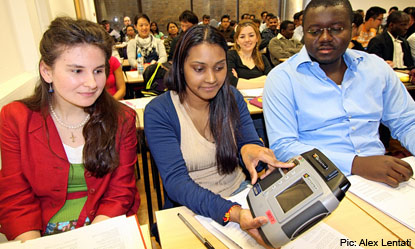 Clocking in: student Sabrina Nurkoo scans her fingerprint in a lecture at the London School of Commerce

Thousands of foreign students in London are being fingerprinted before classes in a clampdown on illegal immigration.

The London School of Commerce is using US army scanners to record the details of every student on campus and is threatening to report truants to the Home Office.

Managers have ordered the college’s 3,500 students to clock in to lectures with a print from their left and right forefinger or risk being thrown out.

There is growing concern that illegal immigrants exploit private colleges as a backdoor route into Britain, with students using them to secure visas.

Home Office officials also fear they could be targeted by terrorists – 10 men arrested over a suspected bomb plot in Manchester in April were registered as students.

LSC manager Rajiv Gupta said the fingerprint system was crucial. “We want bona fide students – not people who can’t be bothered or are abusing the system. If they are mucking around we don’t want them,” he said.

“If a student misses three sessions we will send them a letter and put them on probation. If things don’t improve we will terminate [their position] and inform the Home Office.”

Under the scheme, the first of its kind in the UK, students give their fingerprints and visa details at the beginning of the year.

During each lecture or tutorial they sign in by registering their prints on a machine.

If they are missing a text is sent to their mobile phone and an email to their laptop to tell them to explain themselves.

Staff at the LSC in Southwark have also been told to report students to the Border Agency if they miss more than five lectures in a row without a plausible explanation.

Every year the college reports about eight of its students to the Home Office – one student was deported after she was found to be working 24 hours a week, four more than is legal.

LSC chairmanLord Tomlinson said: “Some universities might think their job is to teach and the pupil’s job is to turn up, but we also see it as our job to get them into class.”

Student Sabrina Nurkoo, 28, from Mauritius said: “My attendance is 100 per cent. We have already given out fingerprints to get our visas and if this means only real students come here then it’s a good thing.

“You don’t want people working or getting into terrorism as it gives us a bad name.”

Since April all overseas students have had to carry biometric identity cards, which are issued once the Home Office has checked the fingerprints of those on their “watchlist”.

Universities have also been told to check students’ sponsors and monitor absences.

A Home Office spokeswoman said: “We have made the system for foreign students tougher than ever.

“Before a student can come here we run them against watchlists and we expect institutions to alert us if a student misses sessions.”