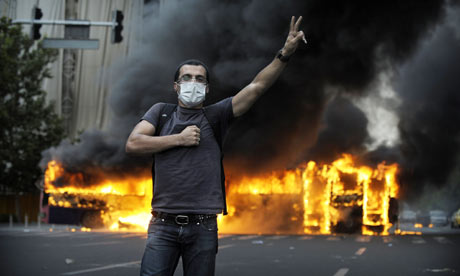 Smoke billows from a burning bus behind a supporter of Mousavi. Photograph: Olivier Laban-mattei/AFP/Getty Images

The defeated Iranian presidential candidate Mir Hossein Mousavi today launched a formal appeal against the election result as his supporters took to the streets of the capital again, raising the prospect of more violent clashes.

Mousavi, who claimed his defeat by the hardliner Mahmoud Ahmadinejad was manipulated, said in a statement on his website that he had appealed to the ruling guardian council to overturn the result, and urged his supporters to continue protests “in a peaceful and legal way”.

With temperatures at 35C, the situation in the Iranian capital threatened to run out of control as special forces in riot gear chased protesters through side streets near Fatemi Square. In a sign of the anger among Mousavi’s supporters, they chanted “the president is committing a crime and the supreme leader is supporting him”, highly inflammatory language in a regime where the supreme leader, Ali Khamenei, is considered irreproachable. Shops, government offices and businesses closed early as tension mounted.

Crowds also gathered outside Mousavi’s headquarters but there was no sign of Ahmadinejad’s chief political rival. Supporters waved their fists and chanted anti-Ahmadinejad slogans. Mousavi’s wife denied rumours that her husband had been placed under house arrest.

Mousavi’s newspaper, Kalemeh Sabz, or the Green Word, did not appear on news stands today. An editor speaking anonymously said authorities had been upset with Mousavi’s statements. The paper’s website reported that more than 10m votes in Friday’s election were missing national identification numbers similar to US social security numbers, which made the votes “untraceable”.

The president, who will address his supporters in a victory rally later today, was dismissive of the protests in a speech. “These [protests] are not important and these are natural,” he said.

He said Iran‘s elections were the “model of democracy” and accused “western oppressors” of criticising the election process. “On Friday’s election, the people of Iran emerged victorious,” he declared.

He also said the country’s nuclear issue “belongs in the past”, an indication that he would not halt the programme that western leaders believe is geared towards creating weapons of mass destruction, despite the olive branch offered by the US president, Barack Obama.

Tens of thousands of flag-waving Ahmadinejad partisans were gathering in the capital’s Valiasr Square for the president’s victory speech, as he attempts a show of force he hopes will quell opposition protests.

Last night saw violent clashes after Ahmadinejad was confirmed as the winner of the presidential election on Friday, barely an hour after the polls had closed.

Protesters set fire to rubbish bins and tires, creating pillars of black smoke among the apartment blocks and office buildings in central Tehran. An empty bus was engulfed in flames on a side road.

Police fought back with clubs, including mobile squads on motorcycles swinging truncheons, as protesters hurled stones and bottles at officers, shouting “Mousavi, give us our votes back” and “the election was full of lies”.

A judiciary spokesman denied they had been arrested but said they were summoned and “warned not to increase tension” before being released.

The Tehran deputy prosecutor, Mahmoud Slarkia, told the semi-official ISNA news agency that fewer than 10 people were arrested on the charge of “disturbing public opinion” through their “false reports” on websites after the election. Iran’s deputy police chief, Ahmad Reza Radan, told the official Islamic Republic News Agency that about 170 people had been arrested for their involvement in Saturday’s protests, 10 of whom were “main planners” and 50 of whom were “rioters”.

The French foreign minister, Bernard Kouchner, said today that his government was worried about the situation and criticised “the somewhat brutal reaction” by authorities in response to demonstrations. The EU said in a statement it was “concerned about alleged irregularities” during Friday’s vote.

Mousavi, who had been widely expected to beat the controversial incumbent if there was a high turnout – or at least do well enough to trigger a second round – insisted he was the victor after the results were announced and appealed against the result to Ayatollah Ali Khamenei.

“I personally strongly protest the many obvious violations and I’m warning I will not surrender to this dangerous charade,” said Mousavi, a former prime minister. “The result will jeopardise the pillars of the Islamic republic and establish tyranny.”

But Khamenei replied that the election had been conducted fairly. He ordered the three defeated candidates and their supporters to avoid “provocative” behaviour. “All Iranians must support and help the elected president,” he warned.

The US secretary of state, Hillary Clinton, said she hoped the election result reflected the “genuine will and desire” of Iranian citizens.

Ahmadinejad’s crushing and contested victory, by 63% to 34%, is a grave setback for hopes of a solution to the crisis over Iran’s nuclear ambitions and for detente with the US now that Obama is seeking dialogue with Tehran. Israel reacted immediately by demanding intensified efforts to stop Iran acquiring nuclear weapons.

A second four-year term for Ahmadinejad torpedoes prospects for the freedoms and economic competence Mousavi had promised Iran’s 72 million people, creating a vibrant, youth-driven “green” reformist movement which had been peaceful until last night’s clashes.

Overt signs of repression included the failure of phone lines for hours after the polls closed and the blocking of the English and Persian-language websites of the BBC and Voice of America – which are regularly attacked by the Iranian authorities as “imperialist”. Text messaging also failed.