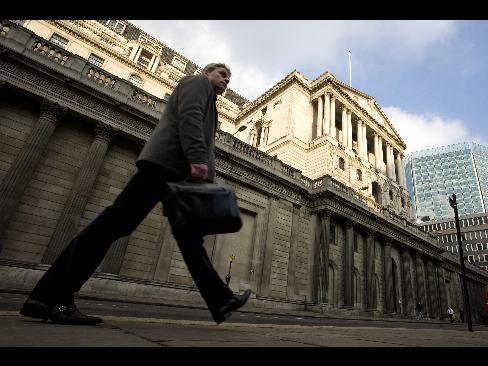 A pedestrian walks past the Bank of England in London’s financial district, in London, U.K., on Jan. 8, 2009. Photographer: Chris Ratcliffe/Bloomberg News

June 12 (Bloomberg) — European governments have approved $5.3 trillion of aid, more than the annual gross domestic product of Germany, to support banks during the credit crunch, according to a European Union document.

The U.K. pledged 781.2 billion euros ($1.1 trillion) to restore confidence in its lenders, the most of any of the 27 EU members, according to a May 26 document prepared by officials from the European Commission, the European Central Bank and member states and obtained by Bloomberg News. Denmark, where 13 of the country’s 140 banks were bailed out by the central bank or bought by rivals last year, committed 593.9 billion euros.

The measures, designed to save banks and revive economic growth, surpass Germany’s $3.3 trillion economy, the region’s biggest. They also helped to widen the Euro area’s budget deficit to the most in three years in 2008. The commission, the EU’s executive arm, is seeking to create the first EU-wide agencies with rule-making powers to monitor risk in the economy after the crisis led to $460 billion of losses and writedowns across the continent, according to data compiled by Bloomberg.

“The operating environment for banks is likely to remain challenging, in particular in respect of credit losses linked to their loan portfolios,” according to the document, produced by the EU’s Economic and Financial Committee. The draft document, partially entitled “the effectiveness of financial support measures,” will be debated at the next meeting of EU leaders on June 18-19 in Brussels.

The U.S. government and the Federal Reserve had spent, lent or committed $12.8 trillion, an amount that approaches the value of everything produced in the country last year, as of March 31.

A majority of new member states including Slovakia, the Czech Republic, Estonia and Lithuania have not taken public measures to support their financial markets, the draft said. Many banks in the region are foreign-owned. More than 80 percent of bank loans in central and eastern Europe come from lenders owned by six western European EU countries, according to Moody’s Investors Service.

All together, the EU paper said that 18 member states have introduced bank liability guarantees, 15 have approved recapitalization measures, and 11 have given liquidity support.

The programs have “contributed to a stabilization of the extremely tense financial market conditions that were witnessed in the autumn of last year,” according to the document. Still, there remain “elevated risk premiums in many parts” of the financial markets and this is “likely to remain challenging.”

The decline of lending in Europe “remains mainly demand- driven, but banks’ balance sheet constraints and limited access to medium- and long-term financing” and high risk premiums “may also have contributed,” according to preliminary ECB analysis, the document said.

Government’s attempts to make banks pledge to increase lending as a condition of taxpayer support may “imply that banks lose one of their credit tools to manage credit risk if no safeguards are established to ensure” that loans are made on commercial terms and with “sound risk management techniques.”

The document called on European leaders to seek further disclosure on impaired assets and to restore confidence in the industry. New EU guidelines may require banks in receipt of aid to sell branches or units to win approval for restructuring plans, according to the document. These guidelines could be approved as soon as the end of the month.

Banks in Germany received the third-largest amount in aid, the document showed, for a total of 554.2 billion euros. Commerzbank AG, Germany’s second-biggest bank, was told to sell its Eurohypo commercial property unit by the Commission on May 7 to win approval for a second bailout by the German government.

Following is a table of European government’s commitments. All figures are in billions of euros and include capital injections, guarantees granted, effective asset relief and liquidity interventions.

To contact the reporter on this story: Meera Louis in Brussels at mlouis1@bloomberg.net