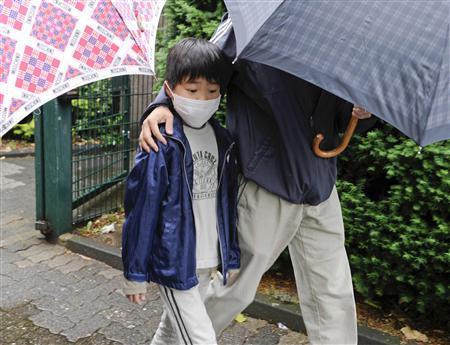 A Japanese school boy wears as face mask as he leaves the Japanese International School in a suburb of the western German city of Duesseldorf June 11, 2009. (REUTERS)

GENEVA (Reuters) – The World Health Organization declared the first flu pandemic of the 21st century on Thursday, urging countries to shore up defenses against the virus which is “not stoppable” but has proved mainly mild so far.

The United Nations agency raised its pandemic flu alert to phase 6 on a six-point scale, indicating the first influenza pandemic since 1968 is under way.

“This is a very important and challenging day for all of us. It is important because we will be raising our pandemic alert level to level 6,” WHO Director-General Dr. Margaret Chan told reporters on a teleconference.

“At this time, the global assessment is that we are seeing a moderate pandemic.”

Acting on the recommendation of flu experts, the WHO reiterated its advice to its 193 member countries not to close borders or impose travel restrictions to halt the movement of people, goods and services.

The move to phase 6 reflects the fact that the disease, widely known as swine flu, was spreading geographically, but does not indicate how virulent it is.

A unanimous experts’ decision was based on an overall assessment in the eight most heavily hit countries — Australia, Britain, Canada, Chile, Japan, Mexico, Spain and the United States — that the virus is spreading in a sustained way in communities, according to Chan.

“Collectively, looking at that, we are satisfied that this virus is spreading to a number of a countries and it is not stoppable,” she said.

“Moving to pandemic phase six level does not imply we will see an increase in the number of deaths or very severe cases.

“Quite on the contrary. Many people are having mild disease, they recover without medicines in some cases and it is good news,” she said.

The WHO recommended drugmakers stay on track to complete production of seasonal influenza vaccine for the northern hemisphere’s next winter in the next two weeks. Each year, normal flu kills up to 500,000 people and infects millions.

Seasonal flu affects mainly elderly, and causes severe illness in millions, so a premature switch in vaccine production to cope with the new strain could put many people at risk.

“So our recommendation is they need to finish the seasonal vaccine and then move over. That is pretty good in terms of dove-tailing the production of the two types of vaccine. So I think that this may just work out,” Chan said.

David Heymann, a former WHO official now chairing Britain’s Health Protection Agency, told Reuters before the announcement: “During phase 5, the government and people in the U.K. have had the time to prepare for a pandemic — this has hopefully decreased any surprise and concern that might be associated with a WHO announcement of phase 6.”

As it spreads in humans, science cannot predict what course the virus will take, the disease it causes and the age groups infected, Heymann said. “The severity of that disease, the effectiveness of antiviral drugs and the stability of the virus must all be watched closely,” Heymann said.

A pandemic could cause enormous disruption to business as workers stay home because they are sick or to look after family members and authorities restrict gatherings of large numbers of people or movement of people or goods.

World markets shrugged off the possibility of a pandemic, as investors focused on possible global economic recovery.

Communicating information about potential risk during a pandemic is very complex and a “huge challenge in the face of scientific uncertainty,” Chan said.

“But the tendency to move into complacency is our biggest concern. Because we need to continue to monitor this virus, follow its tracks and do not allow it to come back in the second wave to give us more trouble.

Widespread transmission of the virus in Victoria, Australia, signaling that it is entrenched in another region besides North America, was one of the key triggers for moving to phase 6.

Five people have been admitted to intensive care in Australia and more than 1,000 cases confirmed following widespread testing in the state. [ID:nSYD482995]

The new strain can be treated by antiviral drugs oseltamivir, the generic name of Roche Holding’s Tamiflu tablets, and Relenza, a spray made by GlaxoSmithKline.

The strain, which emerged in April in Mexico and the United States, has spread widely. There have been 28,774 infections reported in 74 countries to date, including 144 deaths, according to WHO’s latest tally of laboratory-confirmed cases.

But the real number of people with the disease is likely to run into at least hundreds of thousands, as mild cases may not have been detected.

(For WHO information on swine flu, go to: