From Vladivostok to St Petersburg, Russians are taking to the streets in anger over job losses, unpaid wages and controls on imported cars 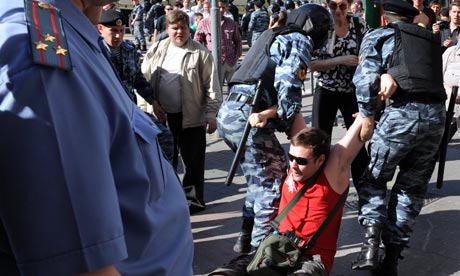 Russia’s prime minister, Vladimir Putin, is facing the most sustained and serious grassroots protests against his leadership for almost a decade, with demonstrations that began in the far east now spreading rapidly across provincial Russia.

Over the past five months car drivers in the towns of Vladivostok and Khabarovsk, on Russia’s Pacific coast, have staged a series of largely unreported rallies, following a Kremlin decision in December to raise import duties on secondhand Japanese cars. The sale and servicing of Japanese vehicles is a major business, and Putin’s diktat has unleashed a wave of protests. Instead of persuading locals to buy box-like Ladas, it has stoked resentment against Moscow, some nine time zones and 3,800 miles (6,100km) away.

“They are a bunch of arseholes,” Roma Butov said unapologetically, standing in the afternoon sunshine next to a row of unsold Nissans. Asked what he thought of Russia’s leaders, he said: “Putin is bad. [President Dmitry] Medvedev is bad. We don’t like them in the far east.”

Butov, 33, and his brother Stas, 25, are car-dealers in Khabarovsk, not far from the Chinese border. Their dusty compound at the edge of town is filled with secondhand models from Japan, including saloons, off-roaders and a bright red fire engine. Here everyone drives a Japanese vehicle.

Putin’s new import law was designed to boost Russia’s struggling car industry, which has been severely battered by the global economic crisis. It doesn’t appear to have worked. In the meantime, factories in other parts of Russia have gone bust, leading to rising unemployment, plummeting living standards and a 9.5% slump in Russia’s GDP in the first quarter of this year.

An uprising that began in Vladivostok is now spreading to European Russia. Last Tuesday some 500 people in the small town of Pikalyovo blocked the federal highway to St Petersburg, 170 miles (270km) away, after their local cement factory shut down, leaving 2,500 people out of work. Two other plants in the town have also closed. The protesters have demanded their unpaid salaries, and have barracked the mayor, telling him they have no money to buy food. They have refused to pay utility bills, prompting the authorities to turn off their hot water. Demonstrators then took to the streets, shouting: “Work, work.”

Putin visited Pikalyovo on Thursday and administered an unprecedented dressing-down to the oligarch Oleg Deripaska, throwing a pen at him and telling him to sign a contract to resume production at his BaselCement factory in the town. He also announced the government would provide £850,000 to meet the unpaid wages of local workers. “You have made thousands of people hostages to your ambitions, your lack of professionalism – or maybe simply your trivial greed,” a fuming Putin told Deripaska and other local factory owners. But Deripaska had had little choice but to shut his factory, since Russia’s construction industry has now virtually collapsed.

Across Russia’s unhappy provinces, Putin is facing the most significant civic unrest since he became president in 2000. Over the past decade ordinary Russians have been content to put up with less freedom in return for greater prosperity. Now, however, the social contract of the Putin era is unravelling, and disgruntled Russians are taking to the streets, as they did in the 1990s, rediscovering their taste for protest.

The events of last week in Pikalyovo also set a dangerous precedent for Russia’s other 500 to 700 mono-towns – all dependent on a single industry for their survival. When their factories go bust, residents have no money to buy food. Seemingly, the only answer is to demonstrate – raising the spectre of a wave of instability and social unrest across the world’s biggest country.

Most embarrassingly for the Kremlin, the latest demonstrations took place just down the road from the St Petersburg Economic Forum, an annual global event designed to showcase Russia’s economic might and its re-emergence as a global power. But after almost a decade of high oil prices – until last summer – Russia has done little to invest in infrastructure, or to help its backward, poverty-stricken regions.

The uprisings began last December when thousands gathered in Vladivostok, demonstrating against the new law on car imports. To crush the protest, and sceptical as to whether the local militia would do the job, the Kremlin flew in special riot police from Moscow. The police arrested dozens of demonstrators and even beat up a Japanese photographer. In Khabarovsk, around 2,000 drivers staged their own noisy protest, driving in convoy with flashing lights to the railway station. Protesters dragged a Russian-made Zhiguli car to their meeting, decorating it with the slogan: “A present from Putin”. They signed it, then dumped it outside the offices of United Russia, Putin’s party.

Among locals, resentment against Moscow is building. “There is no democracy in Russia. They promise a lot. But they don’t listen,” Butov said. He added: “Medvedev isn’t my president. He’s never in the far east.” The Kremlin’s intransigence could provoke a major backlash, he predicted: “In the next few years there could be a war between the east and west of Russia.”

The protests have carried on, with demonstrators regularly taking to the streets in Vladivostok, including last month. Russians in the far east all own right-hand-drive vehicles, which are cheaper to import than the left-hand-drive models used and manufactured in European Russia.

Until recently, the Kremlin had been relatively successful at concealing the scale of the protests, imposing a virtual media blackout. But the demonstrations have become more difficult to ignore. In April Kommersant newspaper reported that angry motorists had called for Medvedev and Putin to be blasted into space, while others waved a banner with the playful slogan: “Putler kaputt!”, apparently comparing Putin, Russia’s prime minister since last year, to Hitler. The authorities were not amused and launched an investigation.

“Russians are a very forbearing people,” Yuri Efimenko, a historian and social activist in Khabarovsk said, sitting in a cafe close to the town’s Amur river, which forms part of the border between Russia and China. “There isn’t love towards the Kremlin, but there used to be respect. Now that’s gone,” he said. He added: “People have become more sceptical towards central power.”

According to Efimenko, there is little danger Russia will have a revolution. Instead of wanting to overthrow the Kremlin, most Russians want Putin to turn up personally and solve their problems – an age-old model in which Putin plays the role of benevolent tsar. Analysts believe there is little possibility of an Orange Revolution in Russia, or much appetite for western-style reform.

The big winner from the protests are the siloviki – the hardline military-intelligence faction, who advocate more state control of business, and want to get rid of the Kremlin’s remaining liberals. The big loser is Medvedev, the hapless president, who may be turfed out of the presidency when his term expires in 2012.

In the meantime, Putin has been promoting Russia’s indigenous car industry. Last week he took to the wheel of his Soviet-era Volga Gaz-21 car, giving Russia’s patriarch a lift. He also gave a £505m loan to help AvtoVAZ, a struggling Russian car factory on the Volga.

The Butov brothers, however, have a unanimous view of Russian-made cars. “They are crap,” Roma said. He recalled how last month Khabarovsk officials gave a free Lada to a war veteran, to celebrate the annual Victory Day on 9 May. “The veteran drove it for a mile. Then it broke down. He came to me and asked if he could swap it for a Japanese model.”