I may have said it a trillion times but this is too important to not repeat myself every day.

When the bond bubble bursts, then the US dollar will be destroyed.
This will be the greatest financial collapse in history.
The ‘Greatest Depression’ (A hyperinflationary depression.).

And again: Got gold … and silver? (… and food and water for several months?!!)

If you prepare yourself, then you have a destiny. If you don’t, then what’s left for you is fate. 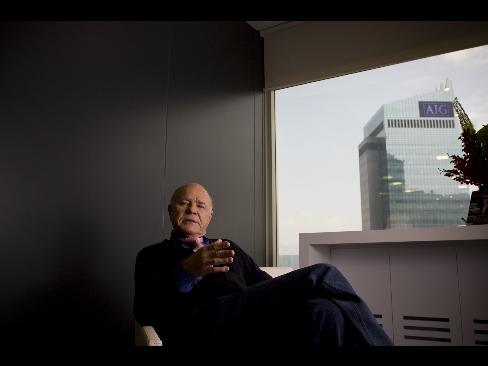 May 27 (Bloomberg) — The U.S. economy will enter “hyperinflation” approaching the levels in Zimbabwe because the Federal Reserve will be reluctant to raise interest rates, investor Marc Faber said.

“I am 100 percent sure that the U.S. will go into hyperinflation,” Faber said. “The problem with government debt growing so much is that when the time will come and the Fed should increase interest rates, they will be very reluctant to do so and so inflation will start to accelerate.”

Federal Reserve Bank of Philadelphia President Charles Plosser said on May 21 inflation may rise to 2.5 percent in 2011. That exceeds the central bank officials’ long-run preferred range of 1.7 percent to 2 percent and contrasts with the concerns of some officials and economists that the economic slump may provoke a broad decline in prices.

“There are some concerns of a risk from inflation from all the liquidity injected into the banking system but it’s not an immediate threat right now given all the excess capacity in the U.S. economy,” said David Cohen, head of Asian economic forecasting at Action Economics in Singapore. “I have a little more confidence that the Fed has an exit strategy for draining all the liquidity at the appropriate time.”

Action Economics is predicting inflation of minus 0.4 percent in the U.S. this year, with prices increasing by 1.8 percent and 2 percent in 2010 and 2011, respectively, Cohen said.

The U.S.’s main interest rate may need to stay near zero for several years given the recession’s depth and forecasts that unemployment will reach 9 percent or higher, Glenn Rudebusch, associate director of research at the Federal Reserve Bank of San Francisco, said yesterday.

Members of the rate-setting Federal Open Market Committee have held the federal funds rate, the overnight lending rate between banks, in a range of zero to 0.25 percent since December to revive lending and end the worst recession in 50 years.

The global economy won’t return to the “prosperity” of 2006 and 2007 even as it rebounds from a recession, Faber said.

Equities in the U.S. won’t fall to new lows, helped by increased money supply, he said. Still, global stocks are “rather overbought” and are “not cheap,” Faber added.

Faber still favors Asian stocks relative to U.S. government bonds and said Japanese equities may outperform many other markets over a five-year period. “Of all the regions in the world, Asia is still the most attractive by far,” he said.

Faber, the publisher of the Gloom, Boom & Doom report, said on April 7 stocks could fall as much as 10 percent before resuming gains. The Standard & Poor’s 500 Index has since climbed 9 percent.

Faber, who said he’s adding to his gold investments, advised buying the precious metal at the start of its eight-year rally, when it traded for less than $300 an ounce. The metal topped $1,000 last year and traded at $949.85 an ounce at 12:50 p.m. Hong Kong time. He also told investors to bail out of U.S. stocks a week before the so-called Black Monday crash in 1987, according to his Web site.

To contact the reporter on this story: Chen Shiyin in Singapore at schen37@bloomberg.net; Bernard Lo in Hong Kong at blo2@bloombeg.net