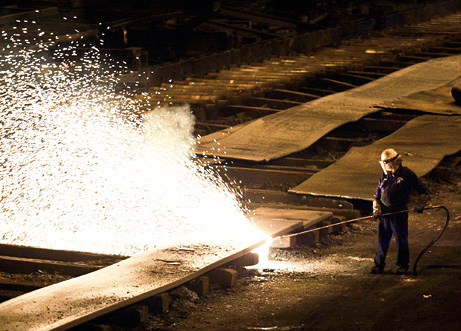 Breathing in small bits of dust and soot may reprogram your DNA in as little as three days, possibly causing increased rates of lung cancer and other diseases, a May 2009 study says.
Researchers tracked DNA damage in 63 steel-foundry workers in Brescia, Italy (above, a worker cuts steel in Ohio in 2004) who, under their normal factory conditions, were exposed to particulate matter. Photograph by Ron Schwane/AP

Breathing in polluted air may wreak havoc on our DNA, reprogramming genes in as few as three days and causing increased rates of cancer and other diseases.

So says a new study that tracked DNA damage in 63 steel-foundry workers in Brescia, Italy, who, under their normal factory conditions, were exposed to particulate matter.

The same damage may occur in city dwellers exposed to normal air, the researchers say.

Particulate matter includes suspended, tiny bits of dust, metal, or soot in the air, which can lodge deep in the lungs. Exposure to the substance has been linked to respiratory diseases, lung cancer, and heart problems.

Scientists know little about how inhaling particulate matter can cause health problems, according to lead study author Andrea Baccarelli of the University of Milan.

But they did find that exposed workers’ DNA was damaged by a slowed rate of “methylation,” a biological process in which genes are organized into different chemical groups.

Fewer groups means that fewer genes are expressed—or made into proteins—a crucial process in the body’s regular maintenance.

Reduced-size gene groups like the ones observed in the new study have also been found in the blood DNA of lung cancer patients.

In the study, the workers’ blood was sampled on the morning of the first day of their workweeks—before they were heavily exposed to the foundry’s air—and again a few days later.

Comparisons between the two samples revealed significant changes in the methylation of four genes that may suppress tumors, said Baccarelli, who presented his research May 17 at the International Conference of the American Thoracic Society in San Diego, California.

You might not have to be a steelworker to sustain this kind of genetic damage, Baccarelli added.

It’s true that air near the steel foundry contains about ten times more particulate matter than ambient—or normal—air, and a larger fraction of foundry-air particles are metals.

But the team speculates that the same damage can occur in city dwellers—the effects, however, take weeks or months to show up.

For instance, Baccarelli has done previous research that shows elderly people in Boston had DNA damage from breathing in particulate matter.

But Baccarelli added that “our results need to be confirmed in air pollution studies before they can be extended to the general population.”

John Heffner is professor of medicine at Oregon Health and Science University and a past president of the American Thoracic Society.

The new study strengthens the link between particulate inhalation and lung cancer, said Heffner, who did not participate in the research.

“Other investigators have shown that inhalation of particulate matter affects DNA through the methylation process,” he said.

“What these investigators have done is show that the genes affected are ones that are known to be related to the development of lung cancer.”

Related work by Baccarelli’s team also raises the possibility that methylation damage from particulate matter can be slowed or even reversed with folic acid, a vitamin naturally found in many foods.

“We found that subjects with higher intakes of methyl nutrients were protected from some of the cardiac effects of particulate matter.”