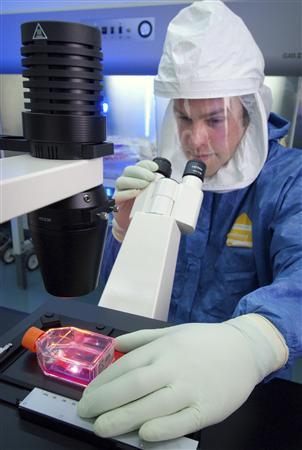 Neal Van Hoeven, a post-doctoral fellow at the Centers for Disease Control, examines a culture flask as he looks for any signs of growth in a stock of influenza virus in this 2008 handout image from the CDC, released April 24, 2009. (REUTERS)

WASHINGTON (Reuters) – A strange new strain of flu that may have killed as many as 60 people in Mexico has also sickened eight people in the United States, the U.S. Centers for Disease Control and Prevention said on Friday.

“Our concern has grown as of yesterday,” CDC acting director Dr. Richard Besser told reporters in a telephone briefing.

“We do not have enough info to fully assess the health threat posed by this new swine flu virus.” He said 7 of 14 Mexican samples had tested positive for the new and unusual strain of H1N1 swine flu.

ATLANTA – Health officials are investigating a never-before-seen form of the flu that combines pig, bird and human viruses and which has infected seven people in California and Texas. All the victims recovered, but the cases are a growing medical mystery because it’s unclear how they caught the virus.

Still, health officials said it’s not a cause for public alarm: The five in California and two in Texas have all recovered, and testing indicates some mainstream antiviral medications seem to work against the virus.

Dr. Anne Schuchat of the CDC said officials believe it can spread human-to-human, which is unusual for a swine flu virus.

The CDC is checking people who have been in contact with the seven confirmed cases, who all became ill between late March and mid-April.

CDC officials detected a virus with a unique combination of gene segments that have not been seen in people or pigs before. The bug contains human virus, avian virus from North America and pig viruses from North America, Europe and Asia.

Health officials have seen mixes of bird, pig and human virus before, but never such an intercontinental combination with more than one pig virus in the mix.

Scientists keep a close eye on flu viruses that emerge from pigs. The animals are considered particularly susceptible to both avian and human viruses and a likely place where the kind of genetic reassortment can take place that might lead to a new form of pandemic flu, said Dr. John Treanor, an infectious disease specialist at the University of Rochester Medical Center.

The virus may be something completely new, or it may have been around for a while but was only detected now because of improved lab testing and disease surveillance, CDC officials said.

The virus was first detected in two children in southern California — a 10-year-old boy in San Diego County and a 9-year-old girl in neighboring Imperial County.

The cases were detected under unusual circumstances. One was seen at a Navy clinic that participates in a specialized disease detection network, and the other was caught through a specialized surveillance system set up in border communities, CDC officials said.

On Thursday, investigators said they had discovered five more cases. That includes a father and his teenage daughter in San Diego County, a 41-year-old woman in Imperial County (the only person hospitalized), and two 16-year-old boys who are friends and live in Guadalupe County, Texas, near San Antonio.

The Texas cases are especially puzzling. One of the California cases — the 10-year-old boy — traveled to Texas early this month, but that was to Dallas, about 270 miles northeast of San Antonio. He did not travel to the San Antonio area, Schuchat said.

The swine flu’s symptoms are like those of the regular flu, mostly involving fever, cough and sore throat, though some of the seven also experienced vomiting and diarrhea.

CDC are not calling it an outbreak, a term that suggests ongoing illnesses. It’s not known if anyone is getting sick from the virus right now, CDC officials said.

It’s also not known if the seasonal flu vaccine that Americans got last fall and early this year protects against this type of virus. People should wash their hands and take other customary precautions, CDC officials said.

U.S. health officials are consulting with Mexican and Canadian health officials, and the CDC is beginning to receive samples from Mexico for testing, a CDC spokesman said. The ethnicity of the seven confirmed cases was not disclosed.