“The Centers for Disease Control and Prevention (CDC) will soon launch experiments designed to combine the H5N1 virus and human flu viruses and then see how the resulting hybrids affect animals. The goal is to assess the chances that such a “reassortant” virus will emerge and how dangerous it might be.” 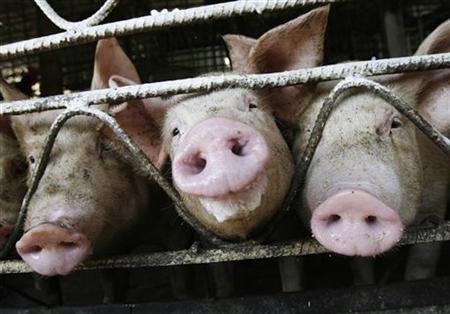 Pigs stick out their snouts through a fence at a farm. (REUTERS)

WASHINGTON (Reuters) – Seven people have been diagnosed with a strange and unusual new kind of swine flu in California and Texas, the U.S. Centers for Disease Control and Prevention reported on Thursday.

All seven people have recovered but the virus itself is a never-before-seen mixture of viruses typical among pigs, birds and humans, the CDC said.

“We are likely to find more cases,” the CDC’s Dr. Anne Schuchat told a telephone briefing. “We don’t think this is time for major concern around the country.”

The CDC reported the new strain of swine flu on Tuesday in two boys from California’s two southernmost counties.

Now, five more cases have been seen — all found via normal surveillance for seasonal influenza. None of the patients, whose symptoms closely resembled seasonal flu, had any direct contact with pigs.

“We believe at this point that human-to-human spread is occurring,” Schuchat said. “That’s unusual. We don’t know yet how widely it is spreading … We are also working with international partners to understand what is occurring in other parts of the world.”

Two of the new cases were among 16-year-olds at the same school in San Antonio “and there’s a father-daughter pair in California,” Schuchat said. One of the boys whose cases was reported on Tuesday had flown to Dallas but the CDC has found no links to the other Texas cases.

“We haven’t seen this strain before, but we hadn’t been looking as intensively as we have,” Schuchat said. “It’s very possible that this is something new that hasn’t been happening before.”

Surveillance for and scrutiny of influenza has been stepped up since 2003, when highly pathogenic H5N1 avian influenza reappeared in Asia. Experts fear this strain, or another strain, could spark a pandemic that could kill millions.

H5N1 currently only rarely infects people but has killed 257 out of 421 infected in 15 countries since 2003, according to the World Health Organization.

The influenza strain is an H1N1, the same family as one of the seasonal flu viruses now circulating. Now that the normal influenza season is waning, it may be easier to spot cases of the new swine flu, Schuchat said.

Only one of the seven cases was sick enough to be hospitalized and all have recovered, Schuchat said.

“This isn’t something that a person could detect at home,” she said. The new cases appear to have somewhat more vomiting and diarrhea than is usually seen in flu, which mostly causes coughing, fever, sore throat and muscle aches.

The CDC is asking doctors to think about the possibility of swine flu when patients appear with these symptoms, to take a sample and send it to state health officials or the CDC for testing.

Cox said the CDC is already preparing a vaccine against the new strain, just in case. “This is standard operating procedure,” Cox said. The agency will issue daily updates here

Seasonal flu kills between 250,000 and 500,000 people globally in an average year. And every few decades, a completely new strain pops up and it can cause a pandemic, a global epidemic that kills many more than usual.