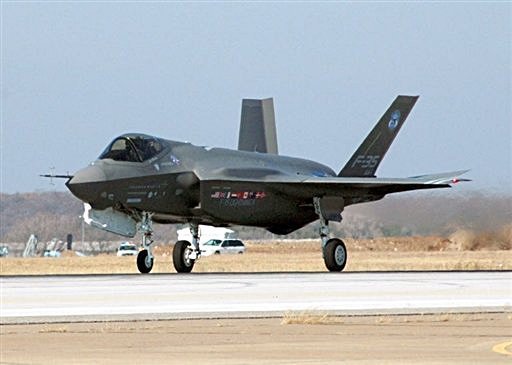 WASHINGTON (AFP) — Computer spies have hacked into the Pentagon’s costly program for a new fighter jet, a US newspaper reported Tuesday, but the Defense Department said sensitive technology for the Joint Strike Fighter aircraft had not been compromised.

The newspaper cited unnamed former US officials saying the attack appeared to have originated in China, which the Pentagon says has put a priority on bolstering its cyber-warfare capability.

Asked if sensitive technology for the Joint Strike Fighter had been jeopardized, Pentagon spokesman Bryan Whitman said: “I’m not aware of any specific concerns.”

Whitman declined to confirm the breach of security for the F-35 but said the number of attempted attacks on the US military’s computer network were on the rise.

“We have seen the number of intrusion attempts more than double recently,” Whitman told reporters, without indicating a time period for the increase or other details.

“I would caution you not to overestimate the ability of people to gain information from our networks. We do have robust, defensive measures to protect our networks.”

The report came as President Barack Obama weighed an overhaul of the government’s approach to cyber-security, including a possible IT security “czar,” with the findings of a policy review expected to be released as soon as this week.

The Journal reported that the computer spies exploited weaknesses in the networks of two or three contractors helping to build the fighter jet.

Aerospace giant Lockheed Martin is the lead firm building the sophisticated aircraft, and Northrop Grumman and BAE Systems are also part of the project.

A top US Air Force officer on Tuesday acknowledged that classified information in the hands of contractors complicated the task of safeguarding technology for the Joint Strike Fighter.

“The F-35 has a lot of suppliers, probably a hundred, they have to be networked together, … but every time you share information, you run the risk, quite frankly, to share this with someone you don’t want to share that with,” Lieutenant General Robert Elder, global strike commander at the US Strategic Command, told a gathering of defense reporters.

The most sensitive information on the F-35 is reportedly stored on secure computers not connected to the Internet.

Eight other countries are involved in the development and financing of the Joint Strike Fighter: Australia, Britain, Canada, Denmark, Italy, The Netherlands, Norway and Turkey.

According to the Journal, one cyber-security breach may have occurred in Turkey and another US ally.

A Pentagon report last month said the Chinese military was focusing on cyber-warfare and that there have been numerous intrusions against US government and other computer networks around the world that “appear to have originated within” China.

It was not clear if the intrusions were carried out or backed by the Chinese government, the Pentagon report said.

India and Belgium reported Chinese hackers had targeted their computer networks last year and US authorities were investigating whether contents of a US government laptop were copied during a visit to China by the then-commerce secretary.

Officials told the Journal similar breaches were discovered at the Air Force’s air traffic-control system in recent months, while the Journal had previously reported that spies hacked into computers used to manage the US electrical grid and other infrastructure.