Yes, this is a bear-market rally and it will end. 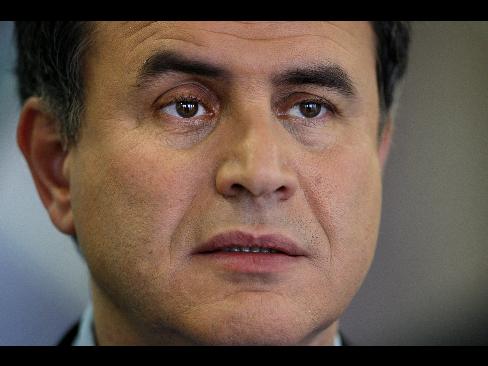 March 26 (Bloomberg) — U.S. stocks will fall and the government will nationalize more banks as the economy contracts through the end of 2009, said Nouriel Roubini, the New York University professor who predicted last year’s economic crisis.

“The stock market is a bit ahead of the real macroeconomic and financial news,” Roubini, a professor at NYU’s Stern School of Business and the chairman of consulting firm Roubini Global Economics, said in an interview with Bloomberg Television in London today. “We’ll have some major banks going belly up that will need to be taken over.”

The global equity rebound in March that sent the Standard & Poor’s 500 Index to its best monthly advance in 17 years is a “bear-market rally” and U.S. Treasury yields will “remain relatively low” as investors flock to the safest assets, Roubini said. Treasury Secretary Timothy Geithner’s new plan to remove toxic debt from financial companies won’t be enough for insolvent banks, he said.

Roubini’s outlook contrasts with predictions this week from Templeton Asset Management Ltd.’s Mark Mobius and Traxis Partners LLC’s Barton Biggs, who said that equities are poised to rally as government efforts to revive the economy and banking system begin to work. Investors are “way too optimistic” about the prospects for a recovery in the economy and earnings, Roubini said.

The S&P 500 surged 7.1 percent on March 23 after Geithner unveiled a plan to finance as much as $1 trillion in purchases of illiquid real-estate assets, using $75 billion to $100 billion of the Treasury’s remaining bank-rescue funds. The government is conducting stress tests of banks to determine how much more capital each will need.

Roubini, who predicts loan and securities losses in the U.S. will reach $3.6 trillion, said the stress tests will reveal that some banks need to be taken over and have their good and bad assets separated before being sold to the private sector. He didn’t name which companies he thought would need to be rescued.

Critics of Geithner’s plan including Nobel laureate Paul Krugman, a professor at Princeton University, say the government should take over banks loaded with devalued assets, remove their top management, and dispose of the toxic securities. Sweden adopted the temporary nationalization approach in the 1990s.

“Some banks are going to have to be nationalized,” said Roubini. “It’s going to be bumpy ahead of us.”

Geithner and Federal Reserve Chairman Ben S. Bernanke this week called for new powers to take over and wind down failing financial companies. They said the U.S. also needs stronger regulation to constrain the risks taken by firms that could endanger the financial system.

With “deflationary forces” lingering for as long as three years, Roubini said U.S. government bond yields will remain low and American house prices will fall as much as 20 percent in the next 18 months. While the dollar will initially benefit as investors seek a safe haven in the U.S., the currency will ultimately drop as the nation’s trade deficit shrinks, he said.

Roubini dismissed China’s call for the creation of a new international reserve currency as a “pie in the sky idea” that’s unlikely to gain traction any time soon.

China’s central bank Governor Zhou Xiaochuan this week urged the International Monetary Fund to expand the use of so- called Special Drawing Rights and move toward a “super- sovereign reserve currency.” Geithner sent the dollar tumbling yesterday by saying he would consider China’s idea, only to drive it back up by affirming that the greenback should remain the world’s reserve currency.

“This was a political call and in a nut shell – it ain’t going to happen any time soon,” Roubini said.

The benchmark index for U.S. equities has surged 11 percent in March, poised for its biggest monthly gain since 1991. The MSCI Emerging Markets Index of equities in 23 developing nations is headed for the steepest monthly advance on record after rising 20 percent in March.