The Israeli government is refusing to comment on reported American claims that its air force carried out a long-range air strike in Sudan. 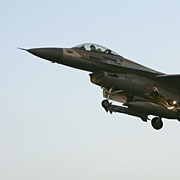 CBS News reports claims by US officials that Israeli aircraft attacked a 17-truck convoy, believing it to be carrying Iranian weapons supplies bound for Hamas in Gaza.

Some 39 people are said to have died during the raid, which allegedly happened in January during the war in Gaza.

It sounds far-fetched – an Israeli air strike on a hostile country 900 miles from home and one that remains a secret for two months.

The story seems to have first surfaced on a Sudanese website this week.

A Sudanese government minister then accused the US of carrying out the strike.

However, CBS claims that version of events has been contradicted in briefings by American government officials who have fingered the Israelis as being responsible.

It is claimed the convoy was smuggling a consignment of weapons shipped from Iran to be smuggled through Sudan, Egypt, and the Sinai and then into Gaza through the border tunnels of Rafah.

Dr Ronen Bergman, author of The Secret War With Iran, told Sky News it is known that Israel intelligence has been operating in Sudan since the 1990s.

“This appears to be the first time that Israel was not satisfied with extracting information but wanted to implement an operation based on that intelligence,” he said.

For Israel to launch a long-distance air strike the target would have had to justify the risks involved.

It would also have required total secrecy.

“It took Iran and Hamas by complete surprise,” Dr Bergman explained. “But Israel would not take such an action without the prior knowledge of the US.”

Officially the Israelis are keeping silent.

They did the same after a reported Israeli airstrike on an alleged nuclear facility in the Syrian desert and after the assassination of a senior Hizbollah commander in the Syrian capital Damascus, widely thought to have been the work of Israeli agents.