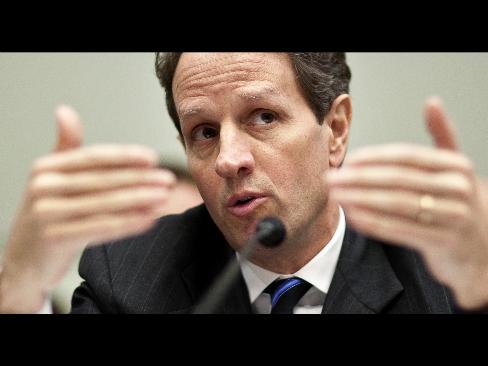 “To address this will require comprehensive reform,” Geithner said at a House Financial Services Committee hearing. “Not modest repairs at the margin, but new rules of the game.”

Geithner’s proposals would bring large hedge funds, private-equity firms and derivatives markets under federal supervision for the first time. A new systemic risk regulator would have powers to force companies to boost their capital or curtail borrowing, and officials would get the authority to seize them if they run into trouble.

The Obama administration is counting on public anger over the taxpayer-financed rescues of American International Group Inc., Bear Stearns Cos. and other firms to help it win approval for the changes, which could be the most sweeping since the 1930s. Policy makers want to improve the oversight of the financial system now rather than wait until the crisis is over, administration officials said on condition of anonymity.

“We have a moment of opportunity now” and “we need to act,” Geithner said. He also called for new standards for executive compensation practices “across all financial firms.”

The administration’s regulatory framework would make it mandatory for large hedge funds, private-equity firms and venture-capital funds to register with the Securities and Exchange Commission, subjecting them to new disclosure requirements and inspections by the agency’s staff. The SEC would be able to refer those firms to the systemic regulator, which could order them to raise capital or curtail borrowing.

The strategy also would require derivatives to be traded through central clearinghouses. And it would add new oversight for money-market mutual funds to reduce the risk of a run on those funds after a shock like last year’s failure of Lehman Brothers Holdings Inc.

The Treasury chief also said regulators should consider new rules requiring banks to set aside extra reserves during boom times to build up a cushion for economic slumps.

“We need to examine our accounting rules to see whether, consistent with investor protection, we can require firms to build up loan-loss reserves that look forward and account for losses in downturns,” Geithner said.

The Treasury secretary said these systemic risk measures are one plank of the Obama administration’s broader agenda for regulation. Geithner said he will call in coming weeks for stronger protections against financial fraud, an elimination of the gaps in oversight among regulatory agencies and stepped-up coordination with international counterparts.

Geithner plans to work with Congress to hammer out more details and legislation, the officials said. It’s unclear how quickly any bills could move through Congress because lawmakers are likely to have their own proposals.

“Thoughtful and effective measures to prevent a repeat of the type of unchecked risk-taking that has currently put the system at risk are absolutely essential, and must be coordinated globally,” said Kirby Daley, senior strategist and head of capital introductions at Newedge Group in Hong Kong.

President Barack Obama will discuss the need for stronger global financial regulation at the summit of Group of 20 leaders in London on April 2.

The Treasury yesterday sent Congress its outline for so- called resolution authority, allowing federal regulators to seize and wind down non-bank financial institutions. The Federal Deposit Insurance Corp. already has that power for banks.

The Treasury and FDIC would be the main agencies that handle the resolution of the systemically important financial companies that aren’t banks. The plan uses procedures similar to the way the FDIC handles bank failures, without tapping the Deposit Insurance Fund used to safeguard bank deposits. A new funding mechanism would be used, the Treasury said.

The American Bankers Association urged caution in expanding the roles of the FDIC to seize financial companies that aren’t banks, saying those powers would be better housed elsewhere. “ABA has serious concerns with formally giving the FDIC this power,” the trade group said in a statement. “It is dangerous to risk confusing the mission of the FDIC.”

Once registered with the SEC, large investment firms would also have to reveal to the agency — but not to the public — information about their trades and counterparties.

The investment firms would only fall under the increased scrutiny if they were deemed to pose systemic risks to the economy. The decision on which firms should be labeled systemically important will be based on characteristics such as the company’s size, interdependence with the financial system, leverage and how much it relies on short-term funding.

“We’re not suggesting they be regulated like banks,” Geithner told the panel in response to a question today. He also said the administration isn’t proposing to set capital-adequacy standards for hedge funds.

“We want them to register with the SEC if they reach a certain scale, and in the future, if some of them reach a size where they may be systemic, at that point we believe they should be brought within a regulatory framework that’s similar to that which exists for banks,” Geithner said.

Geithner’s plan doesn’t specify which agency should police credit default swaps. The swaps are a type of derivative that allows traders to bet on a company’s creditworthiness.

The Fed, Commodity Futures Trading Commission and SEC have been working to set up “clearinghouses” for swaps trades to act as a buyer to every seller and a seller to every buyer, reducing the risk that one firm’s collapse could cause failed trades to reverberate throughout the market.

Regulators have said the lack of a clearinghouse to absorb losses contributed to the government’s $182.5 billion rescue of AIG. The bankruptcy in September of Lehman Brothers also exposed the market’s weaknesses.

AIG sold billions of dollars of the contracts with little money held in reserve in case the bets went wrong, helping seal the insurer’s downfall, Bernanke told lawmakers earlier this week. New York-based AIG also exposed the lack of federal powers to take over a non-bank financial firm and allow an orderly process for liquidating it.

Under Geithner’s proposal, clearinghouses would publicly disclose data on trading volumes. Regulators would have access to individual traders’ bets and counterparties.

When asked about so-called naked credit default swaps, Geithner responded that it would be “terribly hard” to separate out the riskiest trades from other transactions.

“My own sense is that banning naked swaps is not necessary and wouldn’t help fundamentally,” Geithner said. “It’s too hard to distinguish what’s a legitimate hedge that has some economic value from what people might just feel is a speculative bet on some future outcome.”

Geithner also said the administration wants to change fees for deposit-insurance premiums to reduce the relative burden for smaller banks. The administration would like a fee structure that is more “just and fair,” he said.

“Right now in the current system it’s fundamentally unfair because smaller banks are forced to absorb a disproportionate cost of intervention needed to protect the system from, often, mistakes made by larger institutions.”