Some grocery prices have almost doubled in the past year, despite the Retail Price Index falling to zero. 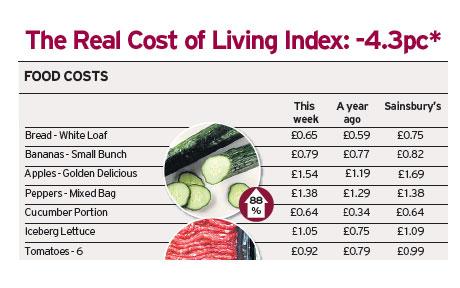 Anyone shopping at their supermarket today will be tempted to scoff at the revelation that prices have not risen at all over the past year, according to the Retail Price Index (RPI).

Some foods have almost doubled in price since this time last year, figures from The Telegraph’s Real Cost of Living Index (RCLI) show. Cucumber portions, for example, have risen by 88pc, while staples such as mince beef (up by 48pc) and Basmati rice (43pc higher) have also become much more expensive.

Other foodstuffs to have risen sharply in price include strawberry jam (up by 34pc), baked beans (32pc), Golden Delicious apples (29pc) and bolognese sauce (27pc), according to the index.

But the RCLI overall shows that the cost of living has fallen by 4.3pc since this time last year. The difference is explained by the other constituents of the index, household bills and transport costs, which fell by 8pc and 11pc on average over the same period.

The overall fall in household bills also masked wide variations, however. All the bills included in the index except mortgage and internet costs rose, but they were outweighed by the dramatic 14pc fall in average mortgage repayments as the Bank of England slashed the official cost of borrowing.

Gas prices rose by an average of 54pc, while electricity went up by 36pc and home insurance by 11pc. But the price of internet and TV services fell by 29pc.

The figures emphasis the crunch facing pensioners. The basic state pension rises in line with the RPI, so while recipients are about to benefit from a 5pc rise on the basis of last September’s RPI figure, they will see no increase at all this year if the RPI stays where it is.

And many pensioners will see no benefit from the costs that have fallen – most will have paid off their mortgage and are less likely to drive long distances or use the internet intensively – while they will spend more of their income on food and household energy.