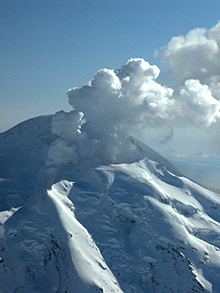 Mount Redoubt, the highest mountain within the largely volcanic Aleutian Range, last erupted nearly 20 years ago. The eruption in 1989 spewed volcanic ash to 45,000 feet and caught a KLM Airlines flight in its plume of smoke, though the flight later landed safely in Anchorage.

Scientists at the Alaska Volcano Observatory warned in late January that eruption was imminent.