Scientists who worked the Star Wars anti-missile programme in the United States are building a ray-gun than can kill mosquitoes in a bid to tackle the scourge of malaria. 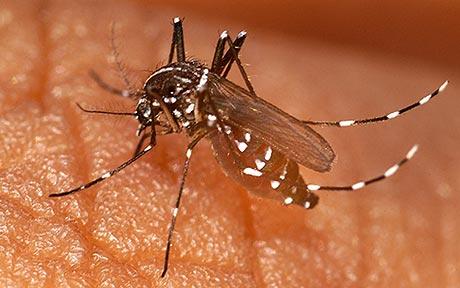 Insect-killing lasers could fight the spread of malaria Photo: AFP

Experts behind the 1980s missile shield idea have helped to develop a laser that locks onto and kills airborne insects.

It is thought the device, dubbed the ‘Weapon of Mosquito Destruction’ (WMD), could be used against mosquitoes, which kill almost one million people around the world every year by spreading malaria.

The research in Seattle, reported in the Wall Street Journal, has been funded by Microsoft billionaire Bill Gates through his charitable foundation.

The WMD laser works by detecting the audio frequency created by the beating of mosquito wings. A computer triggers the laser beam which burns the wings off the mosquito and kills it.

Among those working on the research project are astrophysicists Dr Lowell Wood and Dr Jordin Kare who both worked on the original Star Wars plan to shield America from nuclear attack.

Dr Kare said: “We like to think back then we made some contribution to the ending of the cold war. Now we’re just trying to make a dent in a war that’s actually gone on a lot longer and claimed a lot more lives.”

The laser missile defence system was proposed in the 1980s to knock Soviet missiles from the skies with beams. It was greeted with enthusiasm by President Ronald Reagan but mocked as “Star Wars” by Senator Edward Kennedy and never got off the ground.

The idea of using the same mechanism to kill insects was down to Nathan Myhrvold, a former Microsoft executive who now runs an innovation firm call Intellectual Ventures. The firm was tasked by Mr Gates with exploring new ways of combating malaria and Dr. Wood suggested using lasers. Work on the WMD began last year.