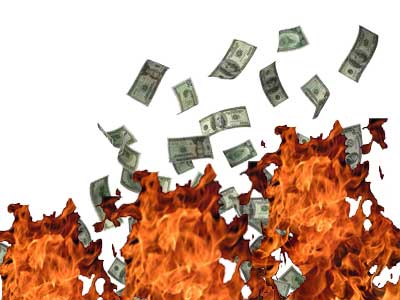 Freddie Mac reported yesterday that its liabilities now exceed its assets, in part because the fair value of its loan portfolio declined by a massive $120 billion. It has said it will need to draw another $30.8 on the loan facility established to keep it afloat. All told it lost just a smidge under $24 billion in the fourth quarter.

Those a mind-boggling numbers. Regular readers know we have a special way of breaking these down to more comprehensible numbers.

Freddie Mac Losses By The Calendar

Each and every day in the last quarter of 2008–including weekends Thanksgiving and Christmas–Freddie Mac lost $265 million. That beats out General Motors, which lost just $85 million a day. It means that every second, Freddie Mac lost more than two weeks worth of the average American’s income. Every 90 seconds, Freddie Mac lost as much as the average home price in the most expensive region in the country.

The main skill required to run Freddie Mac seems to be the ability to light three one thousand dollar bills on fire every second of every day. If these guys keep it up, they may even be able to get a job at AIG one day.