“There has been a tide of government actions which have put expediency over justice time and time again. The British people wear their liberty like an old comfy suit, they are careless about it, but the mood is changing. Last year 80 per cent of people were in favour of ID cards, now 80 per cent are against. There’s a point of reflection that we are reaching, the communications database which is planned to collect every private text and phone call and petrol station receipt will create uproar.” – David Davis

Writers, pop stars, lawyers and politicians from across the party spectrum yesterday issued a call to arms. They joined the largest ever campaign across Britain to warn of the erosion of freedoms and the emergence of surveillance techniques 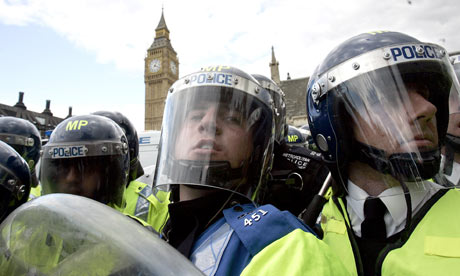 A police cordon outside the Houses of Parliament in 2006. Liberty campaigners warn of a growing police state. Photograph: Adam Butler/AP

The government and the courts are collaborating in slicing away freedoms and pushing Britain to the brink of becoming a “database” police state, a series of sold-out conferences in eight British cities heard yesterday.

In a day of speeches and discussions, academics, politicians, lawyers, writers, journalists and pop stars joined civil liberty campaigners yesterday to issue a call to arms for Britons to defend their democratic rights.

In her speech Kennedy said she felt that fear was being used as a weapon to break down civil liberties. “There is a general feeling that in creating a climate of fear people have been writing a blank cheque to government. People feel the fear of terrorism is being used to take away a lot of rights.”

She said that voters were anxious that their communities were ‘being alienated’ by the use of powers designed to protect national security being applied outside their original remit, and that there was now an open window of opportunity for the electorate to make their feelings known to government before the next election: “People are fearful of the general business of collecting too much information about individuals.”

High on the concerns of the convention were the recent allegations against the British security services by Guantanamo Bay torture victim Binyam Mohamed, plans for ID cards, DNA collection databases and controversial surveillance powers being used by civil servants. In addition, concerns were high over Government plans to create a database of all the communciations and movements of ordinary people as well as the profileration of anti-terrorism laws including detention of suspects.

The Conservative MP David Davis, who resigned from the shadow cabinet in order to fight a byelection on a civil liberties platform, gave the final keynote speech of the day. He told the Observer that he believed the danger of a police state was a very real one and that justice secretary Jack Straw was leading a “piecemeal and casual erosion” of freedom in this country. “There has been a tide of government actions which have put expediency over justice time and time again. The British people wear their liberty like an old comfy suit, they are careless about it, but the mood is changing. Last year 80 per cent of people were in favour of ID cards, now 80 per cent are against. There’s a point of reflection that we are reaching, the communications database which is planned to collect every private text and phone call and petrol station receipt will create uproar.”

That people had paid £35 a ticket to attend such an event was a real sign that people were waking up and getting irritated by the threat, he said. “We are getting on the way to becoming a police state and the surest thing I do know is that by the time we are sure we are, then it will be too late.”

Britain’s judiciary came under fire from many speakers. The courts were accused of helping quash free speech by a panel of leading journalists who agreed that libel law was being manipulated by “dodgy characters” from all over the world who sought legal redress against valid investigative journalism in UK courts.

“Most of this is hidden from public view,” said Alan Rusbridger who complained that British lawyers fees were 140 times as expensive as in the rest of Europe, creating impossible dilemas for journalists on newspapers already suffering from dropping sales and advertising revenues.

London Evening Standard journalist Andrew Gilligan said the planned database would bring an end to privacy and with it “an end of journalism”. He pointed out that in the whole case around the illegal shooting to death by police of Brazilian student Jean Charles de Menezes, the only arrest was that of a journalist who revealed that police statements of the event were untrue.

The Observer and Vanity Fair writer Henry Porter, who co-organised the conference, said he felt tremendously moved by the support shown by everyone who had attended the event or agreed to speak. “I had been feeling like the lone lunatic wandering around Oxford Street with a placard and it’s tremendously moving for me to see how many people share my concerns. The number of tickets, I’m told, could have been sold two or three times over. That has to show people really are thinking about these frightening issues quite seriously.”

The Convention on Modern Liberty, sponsored by Joseph Rowntree Foundation, openDemocracy, Liberty, NO2ID and the Guardian, was launched as an umbrella campaign last month under the statement of purpose: “A call to all concerned with attacks on our fundamental rights and freedoms under pressure from counter-terrorism, financial breakdown and the database state.”

Yesterday’s gathering was by far the largest civil liberties convention ever held in Britain and it was held a day after a leading UN human rights investigator attacked Britain for “undermining” the rights of its citizens. In an advance copy of a report to the UN Human Rights Council, Martin Scheinin said so-called ‘data mining’ blurred the boundary between the targeted observation of suspects and mass surveillance.

Scheinin, the UN’s independent investigator on human rights in the fight against terrorism, also questioned the use of spy software that analyses people’s internet postings to create profiles of terrorists.