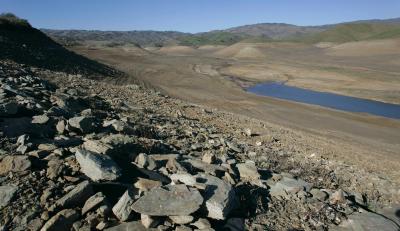 Layers of sun-baked earth are exposed in an area of the San Luis Reservoir near Gustine that was previously underwater but was dried out in January because of drought conditions. (Patrick Tehan / Mercury News)

SACRAMENTO, Calif. (AP) — Gov. Arnold Schwarzenegger declared a state of emergency Friday because of three years of below-average rain and snowfall in California, a step that urges urban water agencies to reduce water use by 20 percent.

“This drought is having a devastating impact on our people, our communities, our economy and our environment, making today’s action absolutely necessary,” the Republican governor said in his statement.

Mandatory rationing is an option if the declaration and other measures are insufficient.

The drought has forced farmers to fallow their fields, put thousands of agricultural workers out of work and led to conservation measures in cities throughout the state, which is the nation’s top agricultural producer.

State agencies must now provide assistance for affected communities and businesses and the Department of Water Resources must protect supplies, all accompanied by a statewide conservation campaign.

Three dry winters have left California’s state- and federally operated reservoirs at their lowest levels since 1992.

Schwarzenegger declared a statewide drought in June but stopped short of calling a state of emergency. His 2008 executive order directed the state Department of Water Resources to speed water transfers to areas with the worst shortages and help local water districts with conservation efforts.

Over the last few weeks, storms have helped bring the seasons’ rain totals to 87 percent of average, but the Sierra snowpack remains at 78 percent of normal for this time of year. State hydrologists say the snowpack must reach between 120 to 130 percent of normal to make up for the two previous dry winters and replenish California’s key reservoirs.

Court decisions intended to protect threatened fish species also have forced a significant cutback in pumping from the Sacramento-San Joaquin delta, the heart of the state’s delivery system.

The governor, farmers and lawmakers have argued for years that California must upgrade its decades-old water supply and delivery system and build new reservoirs.

“The situation is extremely dire,” said Tim Quinn, executive director of the Association of California Water Agencies, adding that the governor’s action Friday “underscores the urgency of serving the long-term structural problems.”

Schwarzenegger’s order leaves the door open for more severe restrictions later. Additional measures can include mandatory water rationing and water reductions if there is no improvement in water reserves and residents fail to conserve on their own.

At least 25 water agencies throughout the state already have imposed mandatory restrictions, while 66 others have voluntary measures in place.

The state prefers such local efforts so it does not have to call for statewide rationing, Snow said.

Almond farmer Shawn Coburn of Mendota said the move comes too late for many growers who already are halfway through the season. Some farmers didn’t bring in bees to pollinate, while others sprayed their orchards with chemicals that keep nuts from forming.