Hungary is teetering on the edge of bankruptcy with its citizens struggling to pay off mortages and personal loans taken out in foreign currency during one of the post-Communist era’s most exhuberant booms. 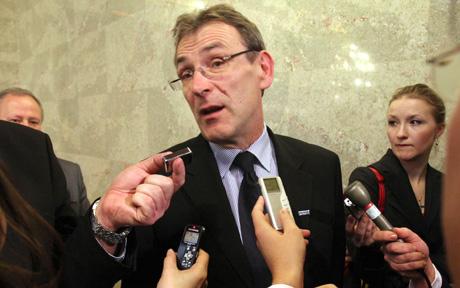 The birthplace of the Rubik’s Cube has provided its government with a multi-sided financial crisis that defies any ingenious solution.

The forint currency has plummeted and unemployment has ballooned, creating a voracious debt trap that is sucking down banks backed by Western taxpayers, particularly those of Switzerland and Austria.

Laslo Gulyas, a Budapest barman, is one of the lucky few who can still meet his repayments. “In times of trouble people need to keep drinking,” he bleakly noted at the counter of a handsome pub in Habsburg-era building.

“But it is sure now that many people with mortgages that were taken because they were cheaper than local loans, have lost their jobs and can’t generate the money to make the repayments.”

For almost a decade Hungary binged on cheap foreign loans taken out in Swiss francs and euros. It was a regional trendsetter. Foreign banks targetted the newly liberated central and eastern European states hoping to expand rapidly in new markets.

“People’s desire for wealth was not bound by the forint,” said Laslo Czirjak, a Budapest fund manager. “They borrowed in Swiss francs, euros and, even for a time, Japanese yen was available – it was just nuts.”

Hundreds of debtors in default have turned to a volunteer organisation, the Association of Bank Loan Victims, for advice on saving their homes from repossession.

Rakitouszki Istvan, a builder, has not been paid for a year and lost his job in August. Last month the bank sold off his flat to a businessman who now wants to evict Mr Istvan and his family.

“I bought my flat for stability in life and for my kids to inherit that,” he said. “I had no idea I was going to get laid-off. I thought as long as I could work I was alright but it’s dreadful. There’s no investment in construction. I’ve been all over the place and there’s nothing.”

Despite losing his property, Mr Istvan remains liable for the entire loan and if he cannot repay, his children would be held liable for the debt. Mariann Lenard, a lawyer who runs the Association, said the law puts mortgage holders at the mercy of the lenders. “For a long time the ordinary man in the street is going to be involved in an unequal struggle with the banks.”

It is not just individuals that are prey to the downturn. Hungary is experiencing its gravest crisis since 1946 when it suffered history’s worst bout of hyper-inflation. Today’s battered forint was introduced then to replace the pengo, which was destroyed after the government tried to wipe out a Second World War debt overhang.

Within the Soviet bloc, however, Hungary was one of the most prosperous states. It’s government kept trade links open to the West, which in turn hoped to use its open borders as a platform to undermine Comecon, the Communist common market.

After the fall of the Berlin wall, Hungary was a poster child for foreign investment, particularly in the realms of car manufacturing and property. After a run on the currency last year, the property market collapsed. A double whammy in the form of a collapse in Western European demand for manufactured goods – most notably cars – means Hungary has seen no advantage from the devaluation. Unemployment has soared – 100,000 people are expected to lose their jobs this year.

“There was a large bubble of consumption based on household debt,” said Janos Samu, an economist with Concorde Securities. “But now the exporters can’t gain on the collapse in the forint. It’s having a double impact on the economy.”

The Hungarian government is attempting to guarantee the mortgage payments of everyone who loses a job in the crisis but it is already in receipt of IMF assistance and the pledge will mean more cuts in general expediture. International help has been sought. Switzerland has promised to provide all the Swiss francs the Hungarian government needs to meet repayment demands. Austria is demanding the EU to establish a 150 billion euro (£134 billion) fund to bail out East and Central Europe.

The highly unpopular prime minister, Ferenc Gyurcsany, hit out at bankers that enjoyed the profits of lucrative cross-border transactions without ensuring customers were fully prepared for the risks of an economy turning sour. “It is just not right if everyone is crying while one person is laughing,” he said.

Hungarians have become aware that the fall out from their folly will stretch far from the Danube’s banks. “What’s happening here means that all of Europe is going to suffer because you can’t have one country drop out of its element without affecting all the continent,” said Mr Gulyas.