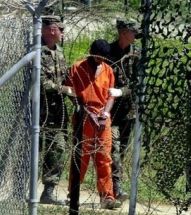 The American Civil Liberties Union has released previously classified excerpts of a government report on harsh interrogation techniques used in Iraq, Afghanistan and Guantanamo Bay. These previously unreported pages detail repeated use of “abusive” behavior, even to the point of prisoner deaths.

The documents, obtained by the ACLU under a Freedom of Information Act request, contain a report by Vice Admiral Albert T. Church, who was tapped to conduct a comprehensive review of Defense Department interrogation operations. Church specifically calls out interrogations at Bagram Air base in Afghanistan as “clearly abusive, and clearly not in keeping with any approved interrogation policy or guidance.”

The two unredacted pages from the Church report may be found here.

The ACLU’s release comes on the same day as a major FOIA document dump by three other leading human rights groups: Documents which reveal the Pentagon ran secret prisons in Bagram and Iraq, that it cooperated with the CIA’s “ghost detention” program and that Defense personnel delayed a prisoner’s release to avoid bad press.

“In both cases, for example, [prisoners] were handcuffed to fixed objects above their heads in order to keep them awake,” reads the document. “Additionally, interrogations in both incidents involved the use of physical violence, including kicking, beating, and the use of “compliance blows” which involved striking the [prisoners] legs with the [interrogators] knees. In both cases, blunt force trauma to the legs was implicated in the deaths. In one case, a pulmonary embolism developed as a consequence of the blunt force trauma, and in the other case pre-existing coronary artery disease was complicated by the blunt force trauma.”

In a press release, the ACLU summarized the documents as detailing, “[An] investigation of two deaths at Bagram. Both detainees were determined to have been killed by pulmonary embolism caused as a result of standing chained in place, sleep depravation and dozens of beatings by guards and possibly interrogators. (Also reveals the use of torture at Gitmo and American-Afghani prisons in Kabul).

“[An] investigation into the homicide or involuntary manslaughter of detainee Dilar Dababa by U.S. forces in 2003 in Iraq.

“[An] investigation launched after allegations that an Iraqi prisoner was subjected to torture and abuse at ‘The Disco’ (located in the Special Operations Force Compound in Mosul Airfield, Mosul, Iraq). The abuse consisted of filling his jumpsuit with ice, then hosing him down and making him stand for long periods of time, sometimes in front of an air conditioner; forcing him to lay down and drink water until he gagged, vomited or choked, having his head banged against a hot steel plate while hooded and interrogated; being forced to do leg lifts with bags of ice placed on his ankles, and being kicked when he could not do more.

“[An] investigation of allegations of torture and abuse that took place in 2003 at Abu Ghraib.

“[And an] investigation that established probable cause to believe that U.S. forces committed homicide in 2003 when they participated in the binding of detainee Abed Mowhoush in a sleeping bag during an interrogation, causing him to die of asphyxiation.”

“A large portion of the torture, maiming, and murder of detainees occurred under authority issued under secret rules of engagement in the Pentagon,” wrote Scott Horton, a contributing editor with Harper’s magazine. “Much of this flowed through Undersecretary of Defense for Intelligence Stephen Cambone, a figure who has so far evaded scrutiny in the torture scandal and now serves as vice president for strategy of QinetiQ North America, a subsidiary of the United Kingdom-based defense contractor QinetiQ. Even the Senate Armed Services Committee review fails to get to the bottom of Dr. Cambone, his interrogations ROEs for special operations units he controlled, and the death, disfigurement and torture of prisoners they handled. This is one of many reasons why a comprehensive investigation with subpoena power is urgently needed. But full airing of the internal investigations already conducted by the Department of Defense is an essential next step.”

The ACLU’s catalog of documents relating to torture under the Bush administration may be found here.