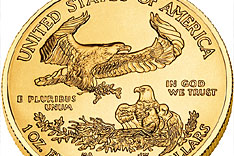 Investors are buying record amounts of gold bars and coins, shunning risky assets for the relative safety of bullion amid renewed fears about the health of the global financial system.

The US Mint sold 92,000 ounces of its popular American Eagle coin last month, almost four times that which it sold a year ago and more than it shipped during the whole of the first half of 2007.

Inflows into gold-backed exchange traded funds surged in January, pushing their bullion holdings to an all-time high of 1,317 tonnes. Last month’s flows of 105 tonnes were above September’s previous record of 104 tonnes, and absorbed about half the world’s gold mine output for January, said Barclays Capital.

“We estimate that investment demand [into gold] could double in 2009 compared to 2007,” said Mr Reade. “Purchases of physical gold have jumped over the past six months as investors’ fears about the current financial crisis … have intensified.”

The move into gold is being driven by the very rich, with bankers saying that some clients are hoarding gold in their vaults. UBS and Goldman Sachs said last week that investor hoarding would drive prices back above $1,000 an ounce. On Monday gold was trading at $892 an ounce.

Traders and analysts said jewellery demand, historically the backbone of gold consumption, had collapsed under the weight of the high prices. Sharp falls in demand in the key markets of India, Turkey and the Middle East have capped the potential of any price rally. But the lack of jewellery demand has not discouraged investors.

Jonathan Spall, director of commodities at Barclays Capital in London, said: “We have seen more new enquiries about investing in gold so far this year than during the whole 2008.”

Philip Klapwijk, chairman of GFMS, the precious metal consultancy, said that investors were buying gold because of fears about the global financial system rather than looking for a quick gain.

“This is a new round of safe haven buying,” Mr Klapwijk said.