French fighter planes were unable to take off after military computers were infected by a computer virus, an intelligence magazine claims. 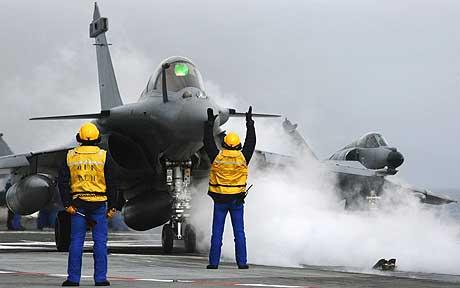 French fighter jets were unable to take off after military computers were attacked by a virus Photo: AFP

The aircraft were unable to download their flight plans after databases were infected by a Microsoft virus they had already been warned about several months beforehand.

At one point French naval staff were also instructed not to even open their computers.

Microsoft had warned that the “Conficker” virus, transmitted through Windows, was attacking computer systems in October last year, but according to reports the French military ignored the warning and failed to install the necessary security measures.

The French newspaper Ouest France said the virus had hit the internal computer network at the French Navy.

Jérome Erulin, French navy spokesman told the paper: “It affected exchanges of information but no information was lost. It was a security problem we had already simulated. We cut the communication links that could have transmitted the virus and 99 per cent of the network is safe.”

However, the French navy admitted that during the time it took to eradicate the virus, it had to return to more traditional forms of communication: telephone, fax and post.

Naval officials said the “infection”‘ was probably due more to negligence than a deliberate attempt to compromise French national security. It said it suspected someone at the navy had used an infected USB key.

The Sicmar Network, on which the most sensitive documents and communications are transmitted was not touched, it said. “The computer virus problem had no effect on the availability of our forces.” The virus attacked the non-secured internal French navy network called Intramar and was detected on 21 January. The whole network was affected and military staff were instructed not to start their computers.

According to Liberation newspaper, two days later the chiefs of staff decided to isolate Intramar from the military’s other computer systems, but certain computers at the Villacoublay air base and in the 8th Transmissions Regiment were infected. Liberation reported that on the 15 and 16 January the Navy’s Rafale aircraft were “nailed to the ground” because they were unable to “download their flight plans”. The aircraft were eventually activated by “another system”.

Liberation also reported that Microsoft had identified the Conficker virus in the autumn of 2008 and had advised users from October last year to update their security patches. IntelligenceOnline reports that “at the heart of the (French) military, the modifications were, for the most part, not done.” It was only on the 16 January “three months later” that the navy chiefs of staffs began to act.

“At that point, the chiefs of staff and the defence ministry had no idea how many computers or military information systems were vulnerable to having been contaminated by the virus,” said Liberation.

The French press also reported that the only consolation for the French Navy was that it was not the only ones to have fallen victim to the virus. It said that a report in the military review Defense Tech revealed that in the first days of January 2009 the British Defence Ministry had been attacked by a hybrid of the virus that had substantially and seriously infected the computer systems of more than 24 RAF bases and 75 per cent of the Royal Navy fleet including the aircraft carrier Ark Royal.