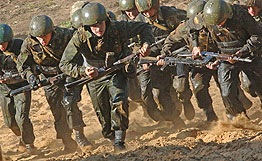 The rapid-reaction force agreement was signed by the leaders of all CSTO member states in the Kremlin, although Uzbekistan recorded “a special opinion.”

“Uzbekistan cannot accept the provision whereby all special services, including emergency services, are to be part of the collective force,” CSTO press secretary Vitaly Strugovets said.

The force will be used to repulse military aggression, conduct anti-terrorist operations, fight transnational crime and drug trafficking, and neutralize the effects of natural disasters.

The force will be permanently based in Russia and placed under a single command, with CSTO member countries contributing special military units.

A source in the Russian delegation said Uzbekistan would not participate in the collective force on a permanent basis but would “delegate” its detachments to take part in operations on an ad hoc basis.

For more information in Russian