I said many, many times that the U.S. is broke.

Things are much, much worse than you have been told.

This will be the ‘Greatest Depression’.

California, the eighth largest economy in the world, is broke. 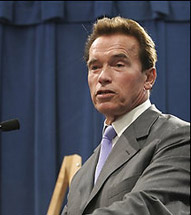 “People are going to be hurt starting today,” said Hallye Jordan, speaking on behalf of the state Controller. “There’s no money.”

Since state legislators failed to meet an end of January deadline on an agreement to make up for California’s $40 billion budget gap, residents won’t be getting their state tax rebates, scholarships to Cal Grant college will go unpaid, vendors invoices will remain uncollected and county social services will cease.

At least, temporarily. Services and payments will resume once state legislators come to an agreement on the budget.

“This time, there are real-world consequences,” said H.D. Palmer, spokesman for the California Department of Finance, in a report by KCRA in Sacramento. “Because we have not been able to get to a budget agreement, payments aren’t going to be made.”

“This is an issue of fairness,” said Assemblyman Ted Gaines, R-Roseville, in the KCRA report. “It hurts hardworking families the most. Refunds, in fact, will stimulate the economy, and taxpayers need their money.”

“I see the will during the negotiations even though these are very, very tough things that we talk about, where we go into areas that we have never, ever dreamt of going into and trying to solve,” said Governor Arnold Schwarzenegger. “So you will be very surprised when the whole thing is done. We’re still not there yet. There is still a lot of work that needs to be done but we are moving slowly forward with this process.”

“If there is no deal by Friday, state government workers will take their first furlough day,” reports the San Diego Union Tribune. “Schwarzenegger has ordered state employees to take two days off a month without pay through June 2010 to save about $1.4 billion.”‘We’re really hoping we can work out a compromise that helps the governor achieve the savings he wants while minimizing the disruption to state services and to the lives of the employees who provide the services,’ said Jim Zamora, spokesman for the Service Employees International Union, Local 1000, which represents the state’s largest employee union with 90,000 workers.”

“Some 46 states face budget shortfalls, forcing them to slash funding for many services,” reported CNN. “But California, the largest state in the union by population, faces a deficit that totals more than 35% of its general fund.”

State lawmakers returned to the Capitol on Monday evening to continue budget negotiations.