The prospect of a trade war between the US and Europe is looming after “Buy American” provisions were added to President Barack Obama’s $820 billion (£573 billion) stimulus package. 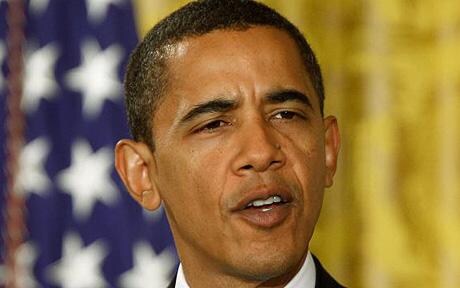 The EU trade commissioner vowed to fight back after the bill passed in the House of Representatives late on Wednesday included a ban on most purchases of foreign steel and iron used in infrastructure projects.

The Senate’s version of the legislation, which will be debated early next week, goes even further, requiring that any projects related to the stimulus use only American-made equipment and goods.

The inclusion of protectionist measures has quickly raised hackles in Europe.

Catherine Ashton, the EU trade commissioner, said: “We are looking at the situation. The one thing we can be absolutely certain about, is if a bill is passed which prohibits the sale or purchase of European goods on American territory, that is something we will not stand idly by and ignore.”

Despite the parlous state of the US economy, some major American firms, including General Electric, are also opposed to the Buy American stipulations, fearing reprisals from overseas and further damage to the global economy.

Bill Lane, government affairs director for Caterpillar, which has just laid off nearly a fifth of its 112,000 work force and is the tenth largest US investor in Britain, warned it was a dangerous step.

He said: “We are the first to recognise that if the US embraces Buy American then the whole notion of buying national will mestastasize and limit our ability to take part in overseas projects.

“We are students of history. A major reason a very deep recession turned into the Great Depression was the fact that countries turned inward.”

Countries in Europe and Asia are planning major injections of cash into infrastructure to boost their economies, and US firms don’t want to be left out of potentially lucrative contracts.

“We would be a primary beneficiary of any type of infrastructure project in the US, but at the same time we are one of the country’s largest exporters,” he added.

They also point to the 1930s as a lesson in the perils of protectionism. Congress passed the Buy American Act in 1933, allowing the government to favour US products for government contracts. Restrictions were eased in 1982, but the plans currently working their way through Congress would bring the new law close to its forebear of 75 years ago.

Foreign steel would only be allowed if using US steel drove up the cost of a project by more than 25 per cent, while the bill passed on Wednesday required that the Transportation and Security Administration use American-made uniforms.

Supporters of Buy American argue that tighter measures are required to protect American jobs and point out that the US steel industry is losing out to Chinese imports subsidised by Beijing.

“As we are losing jobs in record numbers, we obviously need to devote these funds to direct creation of American jobs,” said Sherrod Brown, a senator from Ohio, part of the struggling industrial heartland.

“To do that, we must ensure that federal funds are used to buy American products and to help promote manufacturing in our country. Ultimately I want taxpayers to know where their dollars are being spent. Are they being spent on American products or products coming from Germany or Mexico?”

Mr Obama has sent mixed signals on free trade throughout his campaign and the early days of his presidency. He has argued that the North American Free Trade should be recalibrated in favour of American workers, but has stressed the need for a co-operative international approach to the economic crisis.

Though fellow Democrats in the house and senate drafted their versions of the stimulus bill, the new president and his advisers had major input and influence over the contents.

The bill failed to win a single Republican vote in the house, despite a major charm offensive by Mr Obama, which included a visit to Congress and an invitation to Congressional leaders to drinks at the White House.

It passed thanks to the Democrats’ healthy majority, but the senate bill could see a tougher fight. Each rendering of the bill will be merged at a process known as conference, before being returned to both chambers for a new vote. The president has asked that a final bill be presented to him by February 13.