Five days are left to cut a deal on the state budget. If not, on Sunday, California, the world’s eighth-largest economy, will become the world’s biggest deadbeat.

Having raided every state fund and borrowed the max, the state will start issuing IOUs. College students won’t get Cal Grants. Counties will borrow from reserves to cover social services. State contractors won’t get paid, and taxpayers won’t get refunds. The state already has shut down billions of dollars worth of construction projects. By April, as bills mount up, California, for all practical purposes, will stop functioning as a state.

It’s shameful that things have come this far, but there’s still time to stop things from getting worse – if enough Republicans, at least three in the Assembly and three in the Senate, agree to balance severe cuts to state services with new or higher taxes. Doing so, however, will risk retribution from the rabid right of their party.

All is not totally bleak. House Democrats’ version of President Barack Obama’s $825 billion stimulus includes $10 billion in immediate relief to California, in Medicaid payments for the poor and education aid. That would lop off a quarter of California’s $40 billion deficit. It pays to have friends, like House Speaker Nancy Pelosi, in high places.

So $30 billion in hard choices remains regardless – and less than a week to make them. 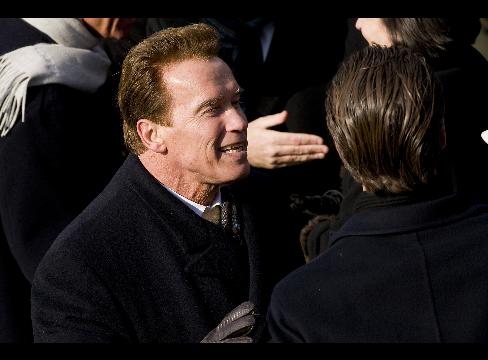 Jan. 26 (Bloomberg) — California Governor Arnold Schwarzenegger said legislative leaders are closing in on an agreement to eliminate the $42 billion budget shortfall threatening to leave the state out of cash as soon as next week.

“We are getting closer and closer,” he said during a press conference. “We’re getting there, but it will still take a few more days to get there.”

Schwarzenegger, a Republican, told reporters in Sacramento the state won’t have enough money to pay for all of its bills “within the next week or 10 days.” With that in mind, Schwarzenegger said he and lawmakers were working.

California, the most-populous U.S. state, is anticipated to have $42 billion less than it will need to pay for schools, police and other expenses through June 2010 because the recession and tumbling stock market have hammered its revenue. Democrats and Republicans have been unable to agree on tax increases or spending cuts sufficient to close the deficit.

Earlier this month, the state controller said he will delay $3.7 billion of payments, including income-tax refunds, if the budget isn’t redrawn in order to ensure there is enough money to pay for schools and meet interest payments on debt, priorities mandated by law.

The deficit and cash shortage developed rapidly after Schwarzenegger signed the current year’s budget in September. Since then, he’s called lawmakers into three special sessions and twice declared fiscal emergencies. On Jan. 7, he vetoed the only plan that reached his desk.

Schwarzenegger’s fellow Republicans have blocked his proposal to raise taxes, which can’t be done without a two- thirds approval. Democrats, who control both chambers of the Legislature, have balked at deep spending cuts and proposals to ease environmental regulations and labor rules.

The governor has proposed a mix of spending cuts, tax increases and borrowing, as well as an economic stimulus package, efforts to curb home foreclosures and streamlined government operations.

Schwarzenegger has held closed-door meetings with legislative leaders for the last two weeks.

The governor and lawmakers say they are working toward finding solutions for the current fiscal year and for the fiscal year that begins in July. Typically, the Legislature doesn’t take up the budget until May and June. If agreement is reached and a final plan approved in February, it would be the earliest in the state’s history that a budget has been enacted.

“This is going to be a big week for California, a big week,” Senate President Pro Tem Darrell Steinberg, a Democrat from Sacramento, said as entered the governor’s office for talks earlier today.

To contact the reporter on this story: William Selway in San Francisco at wselway@bloomberg.netMichael B. Marois in Sacramento at mmarois@bloomberg.net