– Problem: A staged crisis
– Reaction: People ask for more “security”.
– Solution: A “New World Order” where people will give up their freedom in exchange for “security”, which in reality is total control by the elite.

Before it was a ‘terrorism crisis’, now it’s a ‘financial crisis’.

Next will be the financial collapse of the U.K. and the U.S.

People will beg for leadership and a New World Order. 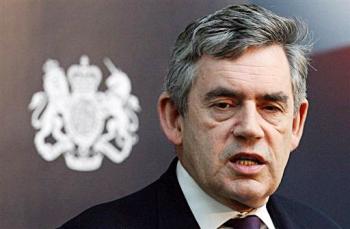 LONDON (AFP) – Prime Minister Gordon Brown said Monday the financial crisis must not be an excuse to retreat into protectionism and instead be viewed as the “difficult birth-pangs of a new global order”.

In a speech, he will urge countries to avoid “muddling through as pessimists” and “make the necessary adjustment to a better future and setting the new rules for this new global order”, according to his office.

Official data confirmed Friday that Britain is in recession. Days earlier, the government unveiled a new package of measures to help the flow of credit in the economy, but Brown has argued global action is needed for a quick recovery.

He will warn Monday that the crisis has given the world a choice: “We could allow this crisis to start a retreat from globalisation.

“As some want, we could close our markets — for capital, financial services, trade and for labour — and therefore reduce the risks of globalisation.

“But that would reduce global growth, deny us the benefits of global trade and confine millions to global poverty.

“Or we could view the threats and challenges we face today as the difficult birth-pangs of a new global order — and our task now as nothing less than making the transition through a new internationalism to the benefits of an expanding global society.”

Britain is hosting a summit of the Group of 20 (G20) advanced and developing nations in London on April 2, and Brown has held preparatory talks with the French and German leaders, as well as new US President Barack Obama.

Brown’s Downing Street office said he would discuss with them “how we can best work internationally on financial reform, economic expansion and the creation of jobs in new sectors such as the environment.”