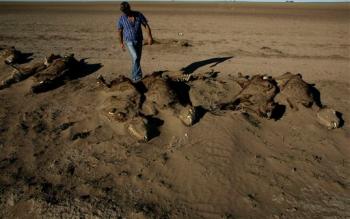 STROEDER, Argentina (AP) – Skeletons of livestock are piling up in the scorching sun of the Southern Hemisphere’s summer as the worst drought in a generation turns much of Argentina’s breadbasket into a dust bowl.

The nation’s farm sector stands to lose $5 billion this year alone – a huge blow to the economy of Argentina, a top world exporter of soy, corn, wheat and beef – as well as to the government of President Cristina Fernandez, which faces billions of dollars in debt payments this year.

Wheat fields that once supplied flour for pasta-loving Argentines now resemble deserts, and spiny thistles are all that survive on cattle ranches in southern Buenos Aires province.

Nothing edible grows, said Hilda Schneider, a 65-year-old rancher who has lost nearly 500 cows to starvation.

“With the situation we’re in now, without any harvest, there’s nothing to do,” said Schneider, one of 2,000 residents in Stroeder, a farming village suffering its worst drought since the 1930s. “We try to save the animals, which is the only thing we have left.”

Nationally, there hasn’t been this little rain in Argentina since 1971, according to Liliana Nunez of the National Weather Service.

She said ocean temperatures in the Southern Atlantic have fueled wind currents that have prevented colder, wetter Pacific fronts from moving in and forming rain clouds over much of Argentina, Paraguay, Uruguay and southwestern Brazil.

Soy growing areas across the region are expecting crop losses. Uruguay has declared a farming emergency. But Argentina seems hardest-hit, with the Agriculture Secretariat projecting a 44 percent drop in the 2008-2009 wheat harvest, and a 27 percent drop in corn. Argentine harvests of more resilient soy are expected to increase by just 7 percent after rising an average of 10 percent per year since 2003.

The farming sector could lose $5 billion this year, and the government could lose $4.3 billion in tax revenue from the agricultural sector, said Milagros Gismondi, an analyst with the economic consultancy Orlando Ferreres y Asociados in Buenos Aires.

How Fernandez responds to the drought could have a big impact on this year’s midterm elections. Her political clout already suffered last year when strikes by farmers and truckers forced her to reverse the tax hikes on grain exports that her government imposed when prices were soaring, in hopes of filling the government’s coffers.

Now some Argentine provinces have declared agricultural emergencies – a move Fernandez has resisted nationally because it would mean canceling or suspending more taxes. But her government has reduced export taxes on wheat, corn, fruits and vegetables in recent weeks to compensate for slumping commodity prices, and temporarily suspended the minimum weight for slaughtering livestock so that ranchers can sell cattle before they starve.

The government also released $66 million in subsidies to small agricultural producers, which translates to about $4,500 each for qualifying farmers in Stroeder. Many said that wouldn’t even cover diesel for their tractors.

Elbio Madarieta’s once-fertile 12,000 acre (5,000 hectare) ranch outside Stroeder is now an arid plain, scattered with the remains of the 900 cattle he lost last year – 25 percent of his herd. The wind kicks up of clouds of dust, and not a stalk of wheat can be seen, let alone anything green for grazing.

The 56-year-old farmer and agronomist figures it will take five years after rains return for the soil to recuperate lost moisture and nutrients. Until then, he’ll have to sell the cows he’s managed to keep alive on costly feed, and restoring the herd won’t be easy, since malnourished cows are less likely to reproduce.

“The declaration of a national disaster is fundamental,” said Javier Jayo Ordoqui, leader of the Argentine Rural Confederation. “Where is the government’s plan for financing the next planting?”

“We’re working on it, redistributing money to assist in the emergency,” Agriculture Secretary Carlos Cheppi said last week. He said the $66 million has already been sent to provincial governments for distribution to farmers.

Vittorio Vavrin, 78, said the last harvest on his medium-sized wheat farm was a bust, and he’s already given up on the next one.

“You can’t keep working with the lack of rain and the price of seed,” said Vavrin, his eyes trained on the dry ground. “I went into debt, the harvests shrank, costs increased. I took out loans and I couldn’t pay them.”

BUENOS AIRES, Jan 21 (IPS) – Severe drought, which is many parts of Argentina is considered the worst in 100 years, has hit the country’s most agriculturally productive region and is expected to cause a sharp decline in grain and meat output.

Rural associations estimate that grain production will drop 39 percent and that 1.5 million head of livestock will be lost, while meat and dairy productivity levels among the surviving animals will be poor.

Drought assistance measures adopted by the government of Cristina Fernández include deliveries of livestock fodder, but farmers say the aid is insufficient given the magnitude of the disaster and are now directing their demands towards provincial governments.

The drought extends from the southern province of Río Negro through the central provinces of La Pampa and Córdoba and east and north to the provinces of Buenos Aires, Entre Ríos, Santa Fe, Corrientes, Chaco, Formosa and Santiago del Estero. It has especially hit the entire 600,000 square kilometre pampas grasslands region, considered one of the most fertile areas in the world.

Chaco Governor Jorge Capitanich predicted that in his province, agricultural output will be half of what it was last year. The area planted in wheat and sunflowers is smaller this year, and yields are down due to the lack of rainfall, he said.

And among corn producers in Entre Ríos, losses are estimated at over 80 percent.

An agricultural emergency has been declared in Chaco, Entre Ríos and Santa Fe, which gives farmers a six-month moratorium on tax and debt payments.

Although rainfall was scarce throughout most of 2008, the drought affecting the 10 provinces, which include the country’s agricultural heartland, has become even more severe in the past few months.

In the northern part of the province of Santa Fe alone, 300,000 head of cattle have been lost, and the rest are surviving in difficult conditions. In addition, fewer animals are pregnant.

The secretary of the Argentine Rural Confederation (CRA), Javier Jayo, told IPS that the current harvests of wheat, corn, soy and sunflower – the main crops – will be 30 million tons lower than in the last growing season.

The 2007-2008 harvest reached a record 97 million tons, including 47 million tons of soy. But political, economic and now climatic factors have conspired to bring about a poor 2008-2009 yield.

First there were the March to July 2008 roadblocks staged by rural associations, whose members were protesting the centre-left Fernández administration’s decision to increase export taxes on soy and grains. The government finally eliminated the tax hike.

Then came the global financial crisis that originated in the United States, which led to a plunge in commodity prices. The price of soy, for example, which was fetching more than 600 dollars a ton, had dropped to half that by the end of the year.

Now the most pressing problem is the climate. According to a report by the National Institute for Agricultural Technology (INTA), “in many parts of the pampas region, rains have been at their lowest level in 100 years.”

“The wheat yield was the lowest in 30 years and everything indicates that national production of corn, soy and sunflowers will also be far below the growing levels of production seen in the last few years,” said the INTA report.

Although INTA has not provided estimates of output other than for wheat, which has already been harvested, rural associations have produced projections.

The CRA predicts that the corn harvest will amount to 15 million tons, down from 22 million tons in the last season, while the soy harvest could shrink from 47 to 37 million tons, if the scarcity of rainfall continues.

As a result, farmers will suffer at least seven billion dollars in losses, and revenue from taxes on grain exports will be down, said Jayo.

“This time the drought extended throughout the entire pampas region, the best agricultural and ranching area, and the rains increased in arid zones,” Alicia Urricarriet, an economist with the Argentina Rural Society (SRA), which represents large landowners, told IPS.

She said the drought in Argentina and Brazil, which together cover 50 percent of global demand for soy, is driving up prices on the Chicago Board of Trade, a global commodity futures exchange.

According to Jayo, the recovery of prices is a reaction to the fall in Argentine production.

Farmers, having just emerged from a year of record output and prices, are thus preparing to face the impact of the dire new conditions.