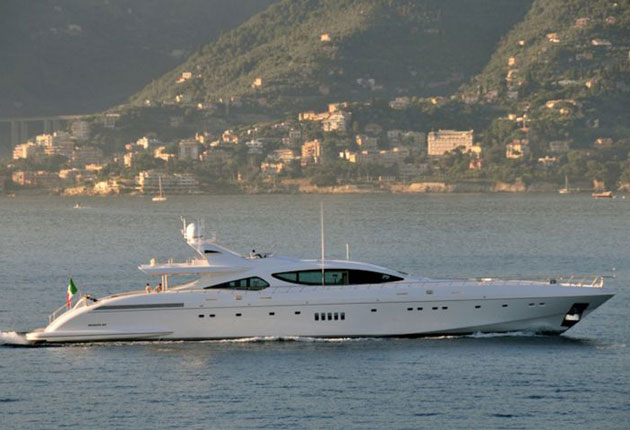 The Mangusta 165, the world’s largest open yacht, which Mr Packer is selling

Even multibillionaires are feeling the pinch. James Packer, once Australia’s richest man, has reportedly put his $50m (£23m) yacht up for sale, postponed delivery of a $60m private jet and left a swimming pool complex at his family property half-built.

Mr Packer, 41, who inherited a fortune from his father, the media tycoon Kerry Packer, has seen the value of his assets halve in the past year, from $6bn to less than $3bn, according to the Sydney Sunday Telegraph. As a result, he is dismantling his playboy lifestyle. A three-level Mayfair apartment is also up for sale.

He launched his Mangusta 165 yacht, the Z Ellerston, in July, after a two-year wait for delivery. The world’s largest model of open yacht, at 165ft, it is sold with a complimentary Aston Martin and features nine bedrooms. Mr Packer has also deferred delivery of a Boeing Business Jet to 2010 to release some capital, the paper said. Mr Packer, who has divested himself of his father’s media interests and is focusing on creating a global casino empire, was listed as Australia’s third richest man last year. That marked the first time in 21 years that he or his father had not sat on top of the rich list.

Since then, the size of his fortune has shrunk further, which may explain why a $3.7m swimming pool and pavilion in the grounds of his sprawling property, Ellerston, in the Hunter Valley, north of Sydney, remains incomplete. Aerial photographs appear to indicate that construction work at the site, which began last year, has stalled.

Mr Packer married a former model, Erica Baxter, 18 months ago. They have a little girl, Indigo. He is said to be overweight and suffering depression as a result of his financial woes, and has not been seen in public for some time. In recent weeks, he has sold his stake in the family’s pastoral company, which operates 17 cattle stations in northern Australia, for about $425m.

However, he still owns one of Australia’s leading golf courses, an 18-hole course designed by Greg Norman, situated at Ellerston and maintained in championship condition year-round.