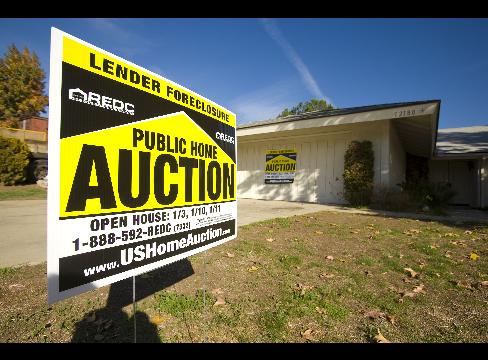 More than 2.3 million properties got a default or auction notice, or were seized by lenders, the Irvine, California-based seller of default data said today. That’s the most RealtyTrac has documented in four years of recordkeeping. Filings rose 41 percent in December from a year earlier to 303,410.

The nation lost more than 2.6 million jobs last year, the most since 1945, and U.S. stocks had their worst performance since the Great Depression. President-elect Barack Obama has said the country needs to prevent foreclosures to revive the housing market and economy.

“If we don’t adopt a comprehensive national policy, we’ll have 5 million to 8 million new foreclosures in the next three years,” Kenneth Rosen, chairman of the Fisher Center for Real Estate and Urban Economics at the University of California, Berkeley, said in an interview. “The single most important thing is making credit available for the average person.”

Obama may use part of the remaining $350 billion in funds from the Troubled Asset Relief Program to help reduce mortgage payments for people facing foreclosure, Lawrence Summers, his top economic adviser, said this week in a letter to congressional leaders.

Barney Frank, a Massachusetts Democrat and chairman of the House Financial Services Committee, said up to $100 billion may be allocated to curb homeowner defaults.

Foreclosure prevention programs offered by U.S. banks and state laws that temporarily delayed property seizures “have not had any real success in slowing down this foreclosure tsunami,” James Saccacio, RealtyTrac’s chief executive officer, said in a statement. One in 54 housing units, or 1.8 percent of homes, received at least one filing in 2008.

About 55 percent of loans modified in the first quarter of 2008 were 30 days or more delinquent six months later, the Office of the Comptroller of the Currency and the Office of Thrift Supervision said in a Dec. 22 report.

Proposed changes to bankruptcy laws that would allow judges to reduce the principal borrowers owe on their mortgages also may fail to stem foreclosures, according to Glenn Boyd, head of U.S. asset-backed securities strategy at Barclays Capital in New York.

Some borrowers will re-default while others whose income is too high to qualify for the plan will walk away from their obligations if neighbors get bailed out, he said.

Home prices in 20 major U.S. cities fell at the fastest rate on record in October and have dropped every month since January 2007, according to the S&P/Case-Shiller index. The gauge declined 18 percent after falling 17.4 percent in September.

“The biggest driver of the housing market has been the drop in home prices, but now it’s the economic risk of the job market collapsing and consumer sentiment,” said Sam Khater, a senior economist at the Santa Ana, California-based mortgage data firm First American CoreLogic.

December foreclosure filings rose 17 percent from November, RealtyTrac said. The total for the year reached 3.2 million, which includes multiple filings against some of the 2.3 million properties affected.

Nevada had the highest foreclosure rate in 2008, with 7.3 percent of housing units in some stage of default. A total of 77,693 properties received a filing, more than double the number in 2007 and a six-fold increase from 2006, according to RealtyTrac.

Florida had the second-highest rate with 4.5 percent of housing units in default. The state had 385,309 properties with filings against them, a 133 percent jump from a year earlier and up 412 percent from 2006.

Arizona had the third-highest rate at 4.49 percent. Properties with filings surged to 116,911, triple the number in 2007 and up 655 percent from 2006, said RealtyTrac, which collects data from more than 2,200 counties that are home to more than 90 percent of the U.S. population.

California had the most properties with filings: 523,624, representing a 110 percent increase from a year earlier and a six-fold jump from 2006. Florida was second and Arizona third, followed by Ohio, Michigan, Illinois, Texas, Georgia, Nevada and New Jersey.

California also had the most cities among the top 10 metro areas with the highest foreclosure rates, led by Stockton, where 9.5 percent of housing units were in default, according to RealtyTrac. Riverside-San Bernardino ranked third, Bakersfield was fourth and Sacramento ninth.

Las Vegas had the second highest rate with 8.9 percent of housing units receiving a filing and Phoenix ranked fifth with 6 percent. Fort Lauderdale, Orlando and Miami, all in Florida, ranked sixth through eighth.

The foreclosure crisis will probably deepen this year as lenders put thousands of bank-owned properties on the market, said real estate broker Mike Novak-Smith in Moreno Valley, California, near Riverside. He said he expects one U.S. lender that he declined to identify to put 3,000 foreclosed homes on the market next month in Southern California.

“I think it will get substantially worse,” Novak-Smith, of the RE/MAX Results brokerage, said in an interview. “You’ve got people losing jobs right and left and the general business climate is bad. We’ve got an economy built on easy credit, and now it’s got to revert.”