The following picture depicts the future Euro/US$ exchange rate.
The US dollar will be destroyed. 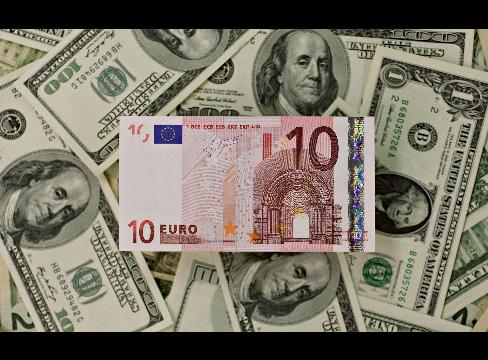 A euro banknote is arranged for a photograph atop U.S. bills, in New York, Dec. 30, 2008. Photographer: Daniel Acker/Bloomberg News

Jan. 13 (Bloomberg) — The euro weakened for a third day versus the dollar, reaching a one-month low, as traders added to bets the European Central Bank will reduce interest rates, decreasing the appeal of the region’s assets.

The 16-nation currency also declined to the lowest level in more than a month against the yen after Standard & Poor’s said it may cut Spain’s credit rating. German Chancellor Angela Merkel’s coalition said yesterday it will spend 50 billion euros ($66.6 billion) to support Europe’s largest economy. New Zealand’s dollar fell to a four-week low after S&P said it may cut the country’s foreign-currency credit rating.

“There is more than enough room for the euro to fall further,” said Hideki Amikura, deputy general manager of foreign exchange in Tokyo at Nomura Trust and Banking Co., a unit of Japan’s largest brokerage. “The focus of the currency market is how far rates will fall in Europe, because the ECB is behind the curve compared with other central banks.”

The euro may decline to $1.25 by next week, Amikura said.

The New Zealand dollar fell to 55.72 U.S. cents from 57.57 cents yesterday in New York after S&P revised its outlook for the South Pacific nation’s AA+ foreign-currency credit rating to negative from stable. The Australian dollar slid to 67.27 U.S. cents from 68.19 cents after prices of oil and other commodities the country exports fell.

The British pound declined to $1.4673 from $1.4822 yesterday after reports today showed the average number of home sales per surveyor slipped and retail sales had the worst December in 14 years.

Officials from major countries should intervene in the currency market to stop the yen from rising, Fujio Mitarai, chairman of Keidanren, Japan’s largest business lobby, told reporters today in Tokyo.

It would be better for Japan’s currency to move in a range of five yen above or below 100 to the dollar, said Mitarai, who is also chairman of Canon Inc.

The ECB in the past six months has cut interest rates only half as much as the Federal Reserve. A Credit Suisse Group AG gauge of probability based on overnight index swaps indicated the ECB will lower its 2.5 percent main refinancing rate by as much as 0.75 percentage point this week. The index fell to minus 207.7 from minus 165.6 on Jan. 5. A reading of minus 100 indicates a 0.25 percentage-point cut. The median forecast of 59 economists surveyed by Bloomberg News is for a 0.5 percentage-point reduction.

The Fed cut its target lending rate in December to a range of zero to 0.25 percent, while the Bank of England lowered its main rate last week by a half-percentage point to 1.5 percent. U.S. central bank Chairman Ben S. Bernanke will give a speech on economic policy at 1 p.m. in London today.

“The ECB’s lagging behind the other global central banks in cutting rates and will certainly continue to exert downward pressure upon the euro,” Greg Salvaggio, vice president of capital markets in Washington at Tempus Consulting Inc., said in a Bloomberg Television interview. “We are very bullish on the dollar against the euro this year. We’re looking for a year-end target of $1.10.”

S&P cited “significant challenges” facing the Spanish economy, which has been hit by the global credit crunch and the collapse of a debt-fueled domestic housing boom. The company said it would probably decide on the top AAA rating for the nation’s sovereign debt this month.

German coalition parties agreed yesterday on a package of measures including about 36 billion euros in infrastructure investment and lower taxes. This is the country’s second stimulus program in the past two months.

“The latest German stimulus package probably won’t be enough to turn back the tide of euro selling,” said Kengo Suzuki, currency strategist at Shinko Securities Co. in Tokyo. “It will take time for these measures to kick in, and other European countries will need to join Germany and announce similar policies. During this time, the ECB is sure to lower rates.”

U.S. President-elect Barack Obama said yesterday he wants the second half of a $700 billion financial bailout fund available to him as “ammunition” in the event of an economic emergency and promised to direct more of the money to small businesses and homeowners. Obama will restrict executive pay and dividends for financial institutions that get “exceptional assistance,” top economic adviser Larry Summers said.

Obama, who takes office on Jan. 20, asked President George W. Bush to request the funds from Congress on his behalf after the outgoing president said he was willing to do so.

Treasury Secretary Henry Paulson allocated most of the first $350 billion of the fund for buying stakes in banks, with other distributions for propping up Citigroup Inc., American International Group Inc. and automakers General Motors Corp. and Chrysler LLC.

“Additional fiscal stimulus may support the dollar marginally,” said Masanobu Ishikawa, general manager of foreign exchange at Tokyo Forex & Ueda Harlow Ltd., Japan’s largest currency broker. “Expectations for the incoming Obama administration are very high. We have to be careful not to get too far ahead of ourselves.”

To contact the reporters on this story: Stanley White in Tokyo at swhite28@bloomberg.net.