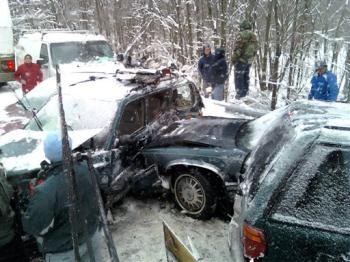 This photo provided by bus passenger Maria Nasta shows a scene from a 59 vehicle pileup including three buses and two tractor-trailer rigs that crashed on a snowy highway on Sunday morning Jan. 11, 2009 on Interstate 93 at Derry, N.H. (AP Photo/Courtesy Maria Nasta)

And, forecasters said a blast of cold air was on the way that could send the thermometer as low as 30 below zero.

“Four-wheel drives are useless – people are just snowed in,” Rhonda Woodhams, the office manager for the Williams County highway department. “People are calling in saying they’re out of milk and diapers for their kids, or they have doctor appointments they need to get to.”

Travel was discouraged in the central and western parts of North Dakota because drifting snow, whipped up by high winds, made the visibility almost zero. While the travel advisory was lifted by midday, new advisories were posted in the southeastern part of the state.

The Minot area got 6 inches of snow, on top of about a foot late last week, while Bismarck picked up another 4 inches.

Bismarck, Fargo and Grand Forks all broke snow records for December, each with more than 30 inches.

Farther south in Nebraska, several people were taken to area hospitals as rescuers responded to a series of crashes involving 27 vehicles on U.S. Highway 30 west of Fremont. No information was available about the extent of their injuries.

The Nebraska State Patrol closed all major highways in northeast Nebraska. Strong winds were creating whiteout conditions in the area.

The weather service issued a blizzard warning for northern Illinois on Monday night, saying winds could be up to 35 mph and wind chills as cold as 20 below zero. The storm is expected to drop between 1 and 3 inches of snowfall.

The National Weather Service reported between 2 and 4 inches of snow in central and western Iowa, bringing totals since the weekend to nearly a foot in some places.

“The big concern is the winds are starting to increase and that will decrease visibility because of the fresh snowfall,” said Brad Fillbach of the National Weather Service in Des Moines.

The storm was already affecting the Des Moines International Airport, where United Airlines and American Airlines had canceled a number of flights Monday night between Des Moines and Chicago and Denver.

If the snow and wind weren’t enough, Iowans will later endure biting cold. Temperatures by early Tuesday were forecast to hover around 12 below zero in northern Iowa, with wind chills of 30 below.

Another system – with even colder temperatures – is expected Wednesday.

“It’s a little of everything, except it will be colder temperature-wise and probably the winds and everything will hit earlier in the day,” meteorologist Karl Jungbluth said.

In Wisconsin, the overnight low could fall to 23 below zero, while later in the week, northeastern North Dakota residents could see the thermometer drop to around 40 below.

The bitter cold that was stalking the upper Plains was expected to bring bone-chilling misery to the East by week’s end.

Residents in the Atlanta area could see temperatures in the high teens later in the week, forecasters said. And in Maine, where overnight lows early Monday dipped to as low as minus 22, even colder weather was in the offing by Thursday.

In Colorado, snowy and icy conditions led to one fatal accident in the northeastern corner of the state early Monday and a sloppy and slow commute across the Denver metro area.