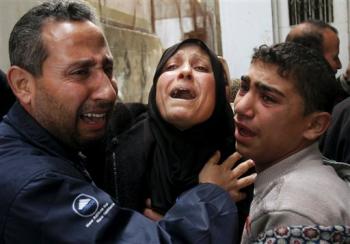 Palestinian relatives of a father and four of his sons from the Khalout family who were killed in an Israeli army operation, react in the family house during their funeral in Beit Lahiya in the northern Gaza Strip, Thursday, Jan. 8, 2009. The U.N. halted deliveries to the Gaza Strip on Thursday after gunfire from an Israeli tank killed an aid truck driver, and the international Red Cross said it would restrict activities after one of its drivers was injured in a similar incident. (AP Photo/Khalil Hamra)

UNITED NATIONS (AP) – Palestinian children are dying at a heavy rate in the Israeli-Hamas fighting – about one of every three persons killed, according to Gaza statistics.

As of Thursday, 257 children were among the approximately 760 reported dead in Gaza. There were another 1,080 children among the 3,100 injured in the conflict, according to statistics from Gaza’s health ministry.

The U.N.’s top humanitarian official, John Holmes, described the numbers as “credible” and deeply disturbing. U.N officials say about half of the casualties were civilians.

Holmes and John Ging, head of Gaza operations for the United Nations Relief and Works Agency, both expressed anger and regret at their decision Thursday to temporarily suspend aid shipments in the Gaza Strip because it was too risky for their aid workers.

“It’s particularly distressing and horrifying that the current casualties seem to be increasingly civilian casualties, with an increasing incidence of whole families being buried in houses which have been hit,” Holmes said.

Ann Veneman, executive director of the U.N. children’s agency, UNICEF, warned the suspension of aid would put children even more in harm’s way.

“This can only deepen an already critical humanitarian situation and put children at even greater risk of death or permanent damage. The distribution of food, water, fuel and medicine should not be impeded,” she said.

The Israeli military said in a statement that it cooperates closely with foreign aid groups to help civilians, and said Hamas uses civilians as human shields.

In all, four of UNRWA’s Gaza staff have been killed since Israel launched a major attack on Hamas 13 days ago, according to the U.N. UNRWA said its deliveries of food have served as a “lifeline” for 750,000 Palestinian refugees in Gaza.

Holmes cited another incident in which a U.N. convoy of two armored vehicles and an ambulance were “targeted by small-arms fire during its passage” Thursday, even though its movement was “agreed in advance” by the Israeli authorities.

The World Health Organization said Gaza’s health services were “on the point of collapse” – the hospitals overwhelmed, health care workers exhausted. It said the dead included 21 medical personnel, 30 more were injured and 11 ambulances have been struck by attacks.

Israel blamed the delay on fighting in the area.